VHS is happiness for video junkie Nate Phillips and his massive collection of tapes. 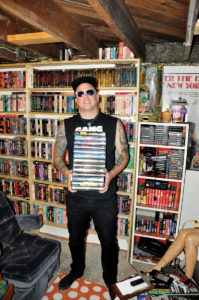 Nate Phillipsâ basement is not a Blockbuster video store, but with a collection of more than 3,000 tapes and authentic movie rental store shelving, it could pass for one.

Watching films via digital streaming has largely destroyed the once mighty video store industry, but within the basement of Nate Phillipsâ home is an epic collection of old-school, at-home, movie-viewing options. At last count, he possessed 3,000 films, but that was some time ago.

âI have a lot more now,â he assures.

Bolstering Phillipsâ movie surplus is 1,100 videodiscs â an at-home viewing option that emerged about the same time as the VCR â and a substantial number of Betamax tapes. (NOTE: VHS and Betamax battled one another for American market share supremacy, and this war peaked in the mid-1980s. Despite the fact that many industry experts preferred Betamaxâs technology, VHS ultimately emerged victorious.)

âMy collection started with records,â he says. âIn the 1990s, it was an inexpensive way to get the music I liked.â

For that same reason, Phillips branched out into buying movies on VHS. He preferred flicks from the 1980s anyway, so it became a cost-efficient way of scratching his cinematic itch.

Other treasures dating back to the Reagan/Bush/Clinton administrations are also in Phillipsâ basement. Within plain view is an Ultimate Warrior lunch bag, lunchboxes of all kinds, Nintendo games, He-Man and Skeletor figurines, a GWAR matchbook, Tonka toys and action figures of many varieties. But the VHS items dominate the optic nerve.

âThe very first VHS (player) available on the U.S. market is this one,â says Phillips, pointing to a boxy machine from the late 1970s. He also has the first Betamax player that was widely available. Neither unit currently plays tapes, but he has plenty of machines that do. One such unit is his Region 3 VCR that can play VHS tapes from anywhere in the world.

But even though Phillips can watch tapes made anywhere in the world, that doesnât mean he has seen every movie in his own house.

âIâm still working on them,â he laughs before saying that doesnât stop him from looking for more. âI try to get stuff by finding it in the wild, by thrifting at Goodwill and that kind of stuff. But if Iâve been looking for something for a year and I can afford to get it, I figure out a way to get it (by using the money earned from selling other collectibles).â

With so many wonderful and rare items, one has to wonder… If his house was burning down, and if he could only take one tape, which would it be?

âIâve never thought of that,â Phillips admits while searching his mindâs mental catalogue. âIâd like to think that would never happen. … Does it have to be one thing or an armload? … Itâd have to be my heavy metal horror shelf, because I could get that in one armload. Thatâs like âHard Rock Zombies,â âRock ânâ Roll Nightmare,â âHard Rock Nightmare,â âRocktober Bloodâ and that kind of stuff. Horror that revolves around a recording session or a concert tour.â

To see Phillipsâ VHS related line of apparel and merchandise that he makes on his four-color one-station press â also in his basement â visit www.mediacrypt.bigcartel.com. ♦