After learning a new axe-throwing technique, Manny Kohl has morphed into a world-class axe thrower. 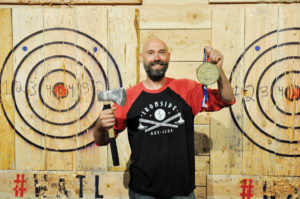 An employee at Ironside Axe Club qualified
for the world championships this upcoming
December, but he will also be competing
at the club in August in the U.S. Open axe
throwing tournament. The last day of the
tourney will be broadcast live on ESPN.

While in the construction business as a journeyman window glazer, Manny Kohl was used to building things up. Now he has fun hurling objects designed to chop things down. Starting in earnest less than a year ago, Kohl has quickly climbed the ranks, honed his craft and become a world class axe thrower.

That is, until last year when Kohl was helping renovate the anchor space in Governor Square in West Des Moines, turning it into Ironside Axe Club. Kohl was friends with the owners before the project, and during a subsequent winter-time work shortage, they asked him if heâd help them operate the place. Eventually they made him a keyholder, and he now helps manage the outfit.

As an axe thrower, Kohl showed promise right away, but he was not elite. That changed while competing in the Arnold Schwarzenegger Classic in Ohio last March.

âThatâs when my whole axe-throwing game changed,â he says. âI met a few guys who are in the top 1 percent.â

Axe throwing the traditional way brings on fatigue, which leads to decreased accuracy. But these guys did things differently than heâd seen before. They used
a technique they called the Canadian Flick, which emphasizes the use of oneâs lower body to guide the throwing motion.

âThatâs going to be awesome,â he says. âESPN is going to be here live. Iâm a little nervous about that.â

A match consists of 10 throws for each participant. Based on where participants land each axe on a bullseye-like apparatus, their scores are tallied. During the fifth and 10th throw, participants can opt to go for the blue dot. But if they miss, they are awarded zero points.

âBut if you get it, you get 8 points,â says Kohl. âOut of 280 throws this season, I had a 75 percent bullseye accuracy. So I was hitting three out of four bullseyes overall.â

Perfect scores are rare because shooting for blue dots is risky and all or nothing. But to win the world championship, blue dots must be hit.

âYouâre probably going to have to throw 60s or better,â predicts Kohl. âTheyâre gonna force you to have to hit those blue dots. I was able to win the regional here without having to do so. But my opponent did make me throw at least 60, which means that, in the final match, I threw 10 bullseyes in a row.â

Could Kohl win a major national event such as the U.S. Open or the world championships?

âI have the physical skills,â he says. âItâs just whether I can stay out of my head.â ♦