3 generations of speedsters are tough to beat. 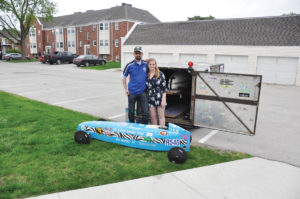 The Zebra Racing Team consists of Kara Darr, an 18-year-old, third-generation soap box race car driver, and her dad, Larry II. The Darr family boasts a long line of derby racing. Larryâs dad began the family tradition as a derby participant in 1948. Kara began her career behind the wheel as a 10-year-old. Since then she has filled the living room with racing awards. Kara finished fourth at last yearâs All-American Soap Box Derby World Championships.

Wrenching, wheeling, tinkering, strategizing, traveling, racing and collecting trophies… Daddy-daughter dances are perfect for some, but the father-daughter
duo of Kara and Larry Darr prefers soap box racing. Together Darr and his daughter form The Zebra Racing Team. Kara drives, and her dad serves as the pit
crew and crew chief.

The Zebra Racing team is tough to beat while racing regularly on its home track at Des Moinesâ Ewing Park. They also do well while on the road â the Darrs have traveled to Chicago, Ohio, Sedalia, Kansas City, Omaha and too many other places to list â returning with dozens of titles, trophies, medals, victories and
awards. These trophies dominate the Darrsâ living room walls.

The sport teaches participants how to work within a team setting, how to handle tools and how to make heat-of-the-moment decisions. It also demands the
mastery of assorted math and science skills â properly tweaking the car based on track conditions majorly impacts a racerâs outcomes.

Occasionally, soap box racing also offers input as to how to help others who
are down on their luck. During wrecks, Larry says the racers often band together, pitching in to help get fallen racers back on track.

One person might have an extra axle, another might have spare scraps for the carâs body, someone else might pitch in a wheel, and before you know it, the racer is back in action, courtesy of his or her competitors.

Finishing in fourth place in the world is quite an accomplishment, but the speedster isnât done chasing victory lane. Only one Iowan â Jason Lamb of Des
Moines in 1988 â has won a soap box derby world championship. Kara intends to be the next, although it wonât be this year â she has a scheduling conflict
precluding her from participating in Akron in 2019.

Racing, whether it is NASCAR or soap box derby, is often thought to be a male sport. But some experts estimate the number of national female racers now outnumbers male racers. In soap box derby racing, boys and girls, ages 7-21, compete against each other on an equal footing.

Competitive soap box cars are generally store-bought kits and are roughly equal to one another. This prevents over-eager parents from buying a title. Racing outcomes are determined by the skill of individual drivers, tweaks to the car, and the strategy of the coach.