You want answers? UFO investigator is working for the truth. 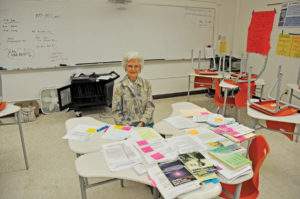 After more than a quarter of a century investigating unexplained sightings of many kinds, Beverly Trout continues to educate the public. She teaches a series of UFO classes for Des Moines School District Adult Education.

âIowa is known as a hotbed for triangles, although we have other shapes as well.â
â Beverly Trout, Iowa MUFONâs chief investigator

Martians. UFOs. Aliens. Life on other planets. Whatever you want to call extraterrestrials, 61 percent of the people on planet Earth believe other life forms exist somewhere other than Earth, according to polling data released by Glocalities. Nearly half (47 percent) of Earthâs citizenry believes intelligent alien civilizations exist elsewhere, and 25 percent say the first form of life on Earth arrived from somewhere else.

Have you ever considered what you would do if you look up this winter and see a twinkling little star shining a little too brightly? And what if that light starts growing a little bigger before suddenly it begins blinking? And if the object then turns into something unexplainable… Have you ever wondered what you would do? Or what you should do? Or even… Who yaâ gonna call if you think you saw a UFO?

The answer isnât Ghostbusters. Instead, you might try calling Mutual UFO Network (MUFON) â the UFO investigation and research organization that was founded in 1969. And if you do, there is a good chance you will speak with Beverly Trout. 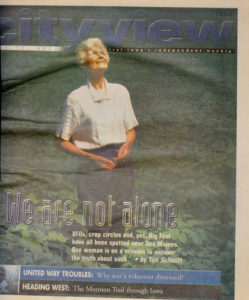 CITYVIEW recognized Trout and her UFO investigative work in the July 12, 2000 issue (by Tim Schmitt). Witnesses at the time had reported a UFO making a horseshoe transit in the Des Moines area on July 4, 2000.

âIâve been investigating for over 26 years and have extremely interesting cases in the Des Moines area, as well as elsewhere in Iowa,â she says. Trout currently serves as MUFONâs assistant state director and chief investigator. She took an interest after witnessing unexplained phenomena herself with her husband on the farm where they lived at the time, just outside of Des Moines. Sheâd heard MUFON had a reputation for objectivity, and she appreciated the anonymity it offered witnesses who report incidents.

âIowa is known as a hotbed for triangles,â she says. âAlthough we have other shapes as well.â

Other shapes include rectangular and circular spacecraft. Many sightings are reportedly only a couple of hundred to a couple of thousand feet in the air.

Recent sightings in the area include a Feb. 16, 2018, observation in the parking lot of the Grimes Walmart. At about 6:27 p.m. a silent triangle was reportedly seen at 1,000 feet altitude for a duration of about 10 seconds at an estimated 250 knots. The UFO maneuvered through the sky and disappeared.

Trout defines âhigh strangenessâ as something seen that is unfamiliar, whether that thing is in the air or on the ground. This includes crop circles, a vehicle from another planet, or anything else that doesnât seem as if it should be in front of your face.

Many witnesses contact Trout privately rather than reporting to MUFON. She says that some report nearby, low-altitude aerial vehicles demonstrating anomalous maneuvers â such as right-angle turns â or traveling at speeds not possible by way of known âEarth-sideâ technology. Trout says some others have reported to her about personal alien encounters with UFO occupants, and this has become a specialty of hers.

After more than a quarter of a century investigating unexplained sightings of many kinds, Trout continues to educate the public. She teaches a series of UFO classes for Des Moines School District Adult Education â this is her 33rd series â and she also just finished her third series of classes for Senior College of Des Moines. In addition, she offers a series at Forest Park Museum in Perry.

MUFON aims to be a refuge for inquisitive minds who seek an answer to the question: âAre we alone in the universe?â Protecting the anonymity of witnesses is of the utmost import to the organization. MUFON does not reveal its witnessesâ identities. If you see something unexplainable, Trout invites you to call her at 515-249-4977 to discuss any high strangeness sightings or occurrences.

âIf your readers have a sighting, or an anomaly they canât quite explain in conventional terms, it would benefit them to contact me directly at my phone number,â she says. âI am always mindful that sometimes witnesses can be in a rather fragile psychological state of mind when theyâre faced with high strangeness and that the opportunity to dialogue with someone like myself can help to sort things out.â ♦