And then there was light!

Behold. 100-plus antique lanterns are a sight to see. 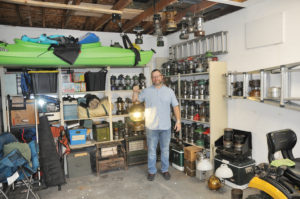 With more than 100 antique gas lanterns, lamps, heaters and stoves, Cain Kremitzki never worries when the power goes out at his Des Moines home. Kremitzki collects and restores Coleman and other brands of light-giving apparatuses. Some are more than 100 years old and running just as well as the day they were made. Photo by Jeff Pitts

Power outages are perfect. Thatâs how Cain Kremitzki sees it. Stints without electricity might seem like an odd thing to root for, but not for a Coleman-style lantern collector with more than 100 gas-burning illuminators.

Kremitzki collects and restores antique lanterns, lamps, heaters and stoves. Some are more than 100 years old and running just as well as the day they were made. His wide array of light-giving devices mostly date back to the 1940s, 1950s or further, and they are mostly of the Coleman brand, although many companies are included in his collection.

âI just thought they were cool, and I like fixing things,â he says.

Lighting up homes and camps are the lanternsâ main function. They also radiate significant heat, which is a nice bonus in the winter. Some are designated to double as a cooktop. Kremitzki makes coffee on them or heats up food. He also has a gas-powered clothing iron, radiant heaters, and chandeliers from the early part of the century that attach to gas tubing that used to be piped through the walls just as electric wiring is now.

Many rare treasures are contained in Kremitzkiâs collection. On the fireplace mantle of his home, he keeps his wedding lantern. During his nuptials, the blue 1920s apparatus served the purpose others assign to a unity candle.

The first type of lantern that Coleman ever made also populates his collection.

âEveryone wants the Arc,â he says. âIt is huge. It looks like a basketball globe.â

Also occasionally lighting the way for Kremitzki is the Coleman CQ Lamp with a 335 D Shade. It is very rare.

âI didnât have to do a thing to it,â he says. âI put fuel in it and lit it right up.â

He credits his âpack rat mentalityâ for the size of his collection.

âThese were made to last,â he says. âIt is rewarding to make something work again.â

Choosing which lantern to take on a camping trip is difficult, but Kremitzki enjoys the fun.

âItâs like choosing which kid you love the most,â he laughs.

Does he have any electric lanterns?