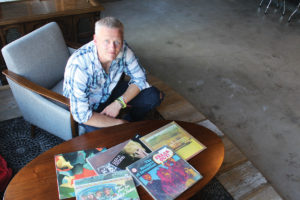 For any fan of Iowa music, Patrick Tape Fleming should be an instantly recognizable name.

If you donât know him as a founding member of Ames-based rock band The Poison Control Center, you might know him from his enduring musical efforts under the moniker Gloom Balloon or as producer for a number of Iowa artists such as Christopher the Conquered or Twins.

Fleming, 37, takes pride not only in his work as a performer but also as a collector of music. Depending on the day you ask him, he would say that heâs been doing one longer than the other.

âIâd drive to, like, Sioux Falls after school because there was like no record store or CD store in my town where I grew up. So Iâd drive to Worthington, Minnesota, or Sioux Falls, South Dakota,â Fleming says.

âMe and my friends would hop in the car on a Tuesday to get the new Pavement record or the new R.E.M. record or Wilco or Eels or stuff like that. That was the great part about it; back in the mid-to-late â90s, you had to work to get your music.â

He must have worked pretty hard since then. His collection of CDs and vinyl records currently adds up to more than 2,000 â a number that even a dedicated collector such as himself has had to tone back on by scrapping most of his CD cases, exchanging them for binders. Fleming usually keeps the art with the discs, though, so not all is lost.

Growing up in the â80s, Fleming has seen the rise of CDs, MP3s and streaming as prominent ways of consuming music, as well as the resurgence of vinyl in recent years.

âI was always into older music, so vinyl was just kind of a really fun, exciting way to listen to music because thatâs the way it was presented at the time,â Fleming says. âIn the â90s, people were putting out 75-minute albums because they could do that and put it on one CD. Every album would have like 18 songs on it, except for like a Weezer album â¦ The medium that supports the music dictates if you feel like youâre getting your moneyâs worth.â

While Fleming literally has thousands of albums to choose from at any one time, he has a handful of favorites that set themselves apart.

In the late â90s, Fleming was at the now-closed Let It Be records in Minneapolis. He glanced at the âWhat the employees are diggingâ shelf and discovered The Olivia Tremor Controlâs debut album âMusic from the Unrealized Film Script: Dusk at Cubist Castle.â While âDuskâ would eventually become Flemingâs all-time favorite album, he instead chose to spotlight the groupâs 1999 effort âBlack Foliage: Animation Music Volume One.â

âBlack Foliageâ went on to inspire Fleming in many ways, most notably how it influenced his recorded music.

âItâs one of those albums that makes you want to make music,â says Fleming. âIt made me want to explore what you could do in the recording studio.â

The Poison Control Center would end up backing the Olivia Tremor Controlâs Bill Doss at a show, and Fleming was even invited to sing a song with the group when they recognized his super-fan status.

When Doss passed away in 2012, Fleming dedicated the second half of Gloom Balloonâs debut album to him. It was titled âFix the Sunshine (An ode for Bill Doss),â a reference to Dossâ own group The Sunshine Fix.

Fleming also cites Harry Nilssonâs âNilsson Sings Newmanâ and Dusty Springfieldâs âDusty in Memphisâ as major influences of his. The latter of which, according to Fleming, would âprobably make you cry if youâd never heard it before, and you were in the mood to cry.â

Having a collection as large as Flemingâs would ultimately mean little if the collector wasnât constantly growing and developing their tastes and skills. Luckily,Fleming has plenty to show for his years of collecting, both physical and spiritual.

âI think a lot of people want to make an album just like how youâd play it live, and I think thatâs, like, the worst thing to do, ever,â Fleming says. âWhatâs the point of going into a studio if you arenât going to use it to your advantage? â¦ I think when you get in the studio, you should make something you couldnât make anywhere else.â ♦