Your city at work: Putting a curb across a bike path. A look at some planks in Iowaâs party platforms. 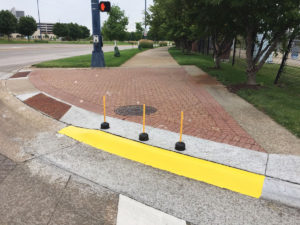 On April 16 of last year, 55-year-old Mark Evans was riding his bike on the side path of MLK Parkway when he crashed at the southeast corner of 16th Street. Two days later, 63-year-old Bob Foss did the same thing. Both bikers were badly injured.

Both men were familiar with the widely used bike path. What they werenât familiar with was a new curb â six inches high and unmarked â that the city built across what most bikers believed to be the path, a curb that replaced a gradual ramp, and a curb that sent both bikers to the ground. The curb barred bikers from cycling in a straight line across the intersection, which they had been doing since MLK and its adjoining path were built 15 or so years ago, and it forced them to angle off the path and then cross 16th Street.

The city says the curb was added to make the intersection safer for bikers. Bikers say, huh?

In fact, Evans and Foss said more than âhuh.â A year ago, Evans sued. Last month, Foss did, too. The suits, in Polk County District Court, say the redesign of the intersection didnât meet engineering or design or safety standards. A five-day jury trial has been set for Dec. 3 in Evansâs suit. No date has yet been set for Fossâs suit.

Evansâs suit says he sustained âinjuries to his head, right shoulder, and ribs.â Fossâs says he âsuffered severe temporary and permanent injuries.â He broke his collarbone and two ribs, among other things. Both bikers were wearing helmets.

Bikers were puzzled when the curb was added, and at least two others besides Evans and Foss took nasty spills there. But the city basically ignored early complaints.

Bikers then took matters into their own hands. On Sunday, July 2, someone â someone who rides bikes a lot â painted the curb with a glow-in-the-dark yellow paint. And someone, presumably that same someone, glued three toilet plungers to the top of the newly painted curb as a further warning to cyclists. Three days later, the plungers were removed, presumably by the city.

In mid-August, the city then put an expensive bench and a trash can at the corner, but it kept the curb. To some, the bench and trash can simply were additional hazards.

Earlier this year, the city redesigned the intersection again. This time, they took out the bench and the trash can and the curb and put a ramp back in, letting bikers take a clear, straight shot across 16th.

So, to date: the city has torn out a ramp and put in a curbing, has put in a bench and a trash bin, has removed the bench and the bin, has torn out the curbing and put a ramp back in. And has been sued twice. Two bikers have been seriously hurt, two others less seriously so. And someone bought a can of yellow paint and three toilet plungers. â¦

If you are Democrat Fred Hubbell and you are running for Governor, you might want to ask Republican Kim Reynolds:

Do you believe the state should ban gay marriage?

Do you support allowing prayer in public schools?

Do you believe teachers should be able to carry guns in schools?

Do you oppose civil-rights protections for gay and bisexual people?

Do you oppose subsidies of all kinds?

Do you believe all public-sector unions should be eliminated?

Do you oppose traffic cameras?

Do you support repeal of Obamacare?

Do you support repeal of the income tax and replacing it with a flat tax or a consumption tax?

And if you are Reynolds, you might want to ask Hubbell:

Do you believe in starting a federal jobs program similar to the Depression-era Works Progress Administration?

Do you support restoring protections of public-sector unions?

Do you believe in local control of minimum wages?

Do you believe credit unions should get to keep their tax breaks?

Do you believe all public schools should have sex-education classes that include discussions of gay sex?

Do you believe prisoners should be allowed to vote?

Do you believe in all-gender restrooms?

Do you believe the United States should admit 100,000 Syrian refugees every year?

Those are planks in the state party platforms adopted this summer. They are the official positions of the parties, so itâs fair game to ask the candidates if they support those positions. No one will, though. ♦

A GOP message for Grassley?

Iowaâs Republicans love Chuck Grassley. He has been in the United States Senate since 1981, and he is always re-elected easily. Iowa Republicans like his aw-shucks manner, his power on the Judiciary Committee, and his eagle eye in finding government waste.

And yet the state Republican platform approved this summer by the delegates to the state convention takes a couple of swipes at him.

And it calls for ârepeal of the 17th Amendment to the U.S. Constitution.â

The 17th Amendment, which was ratified in 1913, established the direct election of United States Senators. Until then, the Senators â as mandated by the Constitution â were chosen by their state legislatures. The idea was that, if legislatures appointed senators, the balance of power between state legislatures and the federal government might be a bit more even.

Repeal is a goofy idea, but itâs been on the agenda of some on the far right for several years. If it had been in effect, Grassley would have been a one-termer. Democrats controlled both houses of the Iowa Legislature in 1986, when Grassley first stood for re-election.

Perhaps someone should have reminded the delegates that the beloved Bob Ray served five terms as governor, that Terry Branstad served five-and-a-half, and that Grassley is in his seventh six-year term in the Senate.

Of course, the platform doesnât say what the limit on terms should be. Maybe the delegates were thinking of, say, eight. ♦

When Don Kaul took over his Des Moines Register column in 1965, his bosses were at a meeting in New York. So he sent them a wire:

He wasnât yet the talk of the town, but he was on his way. His column replaced a gossipy, chatty column by Harlan Miller â âshaved while musingâ¦,â âmused while shavingâ¦â â and he rather quickly turned it into a daily commentary on everything from the city council to war in Vietnam.

Kaul, who died of cancer on July 22 at age 83, saw the absurdity in everything â in war, in politics, in raising kids, in the state legislature, in (especially) Richard Nixonâs presidency. And, on slow news days, he could always get the state worked up by writing about six-on-six girlsâ basketball. (âWhere else can you see a basketball player in full battle dress wearing a corsage?â)

He probably will be remembered as the co-founder, with John Karras, of The Registerâs Annual Great Bicycle Ride Across Iowa, but he should be remembered for more. He was smart in print and quick in person, and while he enjoyed outraging readers, he got equal joy out of amusing friends. He was genuinely kind. And quirky. (Who else do you know who drove a Checker automobile?)

He started out in 1960 on the afternoon Des Moines Tribune, where he was a good reporter with a good reporterâs disdain for most editors, particularly his immediate boss. But the top editors at the time â Managing Editor Frank Eyerly and Editor Ken MacDonald (whom Kaul idolized) â saw something in his writing, or perhaps his newsroom behavior, that made them think he could succeed the bland and aging Miller.

He asked for a transfer to Washington in the early 1970s â where he could find even more absurdities to write about â and then became crosswise with Register editor Jim Gannon. Gannon ultimately fired Kaul. Or perhaps Kaul quit. It was never clear. At any rate, Gannonâs successor, Geneva Overholser, rehired him, and all was right with the world again. He was back in rare form. (âI was also the first to identify the classic defense of girls basketball: Standing in One Place and Waving Your Hands a Lot.â)

For many years, I was Kaulâs editor. I corrected his spelling and controlled his pay. He didnât care much about spelling, but he did care about pay. Once, when I returned from lunch, there was a steering wheel on my desk. It was identical to the one in my car.

âWe have your car,â the scribbled note said. âWe will return it part by part until you give Kaul a raise.â ♦