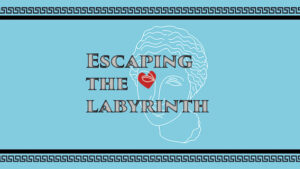 The road to presenting a world premiere has as many twists and turns as a global journey to the Temple of Apollo. The paths of the playwright, Thomas Hischak, and the presenting producer, Des Moines Community Playhouse, converge this month when âEscaping the Labyrinthâ makes its official stage debut.

âPlaywrighting starts with a germinal idea,â shares creator Thomas Hischak. âI was in Greece teaching and directing, visiting several (historic) sites when not working. I went to Delphi. There was something mystical about it. You could almost feel like the Greek gods are still up thereâ¦thatâs where it (âEscaping the Labyrinthâ) started.â

This premiere seems to have the blessing of the gods in how the partnership  converged in Des Moines. One playwright, one theater, one catalytic organization. Thomas Hischak is a prolific, respected playwright. The Playhouse is nationally praised, and one of Americaâs longest continually running community theaters. The American Association of Community Theatreâs NewPlayFest provides the framework. Winning scripts are produced by selected theaters in the AACT membership, giving the play nationwide promotion. The winning plays are published in an anthology by Dramatic Publishing Company. This biennial program, launched in 2014, does what few others do: provide playwrights viable opportunities to have their plays produced. This is the Playhouseâs inaugural time as a NewPlayFest presenter, and I hope it will not be the last as this exceptional community theater project continues.

Hischak, whose play âThe Emperor of North Americaâ was a 2016 NewPlayFest selection, is especially connected to this yearâs winner.

âIâve always loved mythology. So, I asked what if the gods were among us, and a human fell in love with one, and the complications that would create.

âBuilding a play around this premise that the gods are still around, that they are hidden and blend into the fabric of society, and they have for over 2,000 yearsâ triggered a marvelously creative thread for âEscaping the Labyrinth.â âWhat would happen with this man, this scholar of Greek literature and art, and he discovered this. How would it change his life?â

âEscaping the Labyrinthâ is a romantic comedy with fantasy infusions as its protagonist, Bud Schlieman, starts his time-jumping adventures during a Greek tour in 1951. A chance encounter with Hermes, who unintentionally reveals his divine identity, begins his quest to find others. When he meets and falls for a waitress, who is Artemis, she runs, he pursues, until the impassioned crusade comes full circle where it began.

âThe play starts in Delphi and ends there 50 years later,â adds Hischak. âThe Greek gods are probably still around today. People just donât believe in them. They are immortal. This theme comes up in literature often.â

Thankfully for Des Moines audiences, this theme is delightfully and playfully woven into âEscaping the Labyrinth.â

Karen Schaeffer is a Des Moines-based playwright and actress. She premiered one of her plays at the Playhouse (âGirlsâ Weekendâ), and she has had her plays produced in the United States, Canada and Germany. She produced a winner for the recent round NewPlayFest submissions, âUnpacking Mother.â It will be produced early in 2022 at the Market House Theatre in Paducah, Kentucky. Donât be surprised if another of Schaefferâs plays ends up on the Playhouse stage sometime in the future. ♦