Adapting to deliver to theatrical audiences 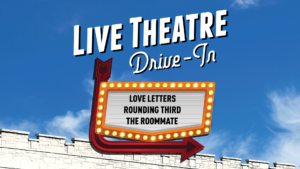 As with many theatre producers, the Des Moines Community Playhouse is finding creative ways to keep connections with their patrons. They launched this drive-in theatre concept in June.

The COVID-19 pandemic changed all aspects of our lives as it insidiously swept into every corner the world. The world of live performing arts was immediately plunged into a foggy realm of uncertainty. Shows were canceled, then seasons. Audience participation evaporated. This was a catastrophic blow to live theater.

Central Iowa was forced into cultural hibernation. How long this creative winter would last was unknown. Regrouping of staff and futures quickly happened.

Creativity survives. The companies and their core teams and boards hunkered down to respond to the situation. Contingencies would be created. They were pioneering uncharted territory.

A chance to meet the producers

While we await a return to sharing a live performance with other kindred spirits, many companies are introducing Iowans to the creative leaders who drive the theatrical efforts. Iowa Stage Theatre Company, which provides a stipend for its performers and key production personnel, continues to develop a series of âISTC YouTubeâ interviews with Greater Des Moines theater leaders. Des Moines Community Playhouse produced a YouTube presentation about what they are doing.

The ones patiently awaiting a chance to return

Carousel Theatre of Indianola, Class Act Productions, Des Moines Young Artistsâ Theatre, Iowa Shakespeare Experience, Pyramid Theatre Company, Tallgrass Theatre Company, and Urbandale Community Theatre all have either postponed and/or canceled planned shows with no definitive future performances slated. One company caught in about the worst possible scenario is Tallgrass Theatre Company. Their performing venueâs landlord, West Des Moines Public Schools, decided to terminate all long-term contracts with those renting their facilities. The home that Tallgrass had so carefully developed into a unique, inviting and intimate performing space would be gone at the end of this current season. Then, the pandemic hit, a week from their opening of their season finale. While they had been searching for a new space. With the quarantine, all of the companyâs equipment, set and other materials were locked away where they could not access them. The board, supporters and their artistic director, Tom Perrine, are an intrepid group and will find a way to evolve, but feel free to connect to see if you can help.

Engaging, even if from afar

Des Moines Performing Arts will be presenting their popular summer campsâ¦ virtually. The Playhouse will present virtual Funday Fridays for young audiences. DMPA is sharing its virtual showcase for the stellar Iowa High School Musical Theatre Awards impacted by the pandemic.
Virtual and socially distanced performances are being offered by Ankeny Community Theatre and the Playhouse. Ankeny is presenting a series of Four Readers Virtual Theaters live streamed on July 12, July 26, Aug. 9, and Aug. 23, at 7:30 p.m. The twin bill will include âLess-Fear Shakespeare Part IIâ and âGod of Carnage.â Advance registration is required; no ticket fee but donations appreciated.

The Playhouse has launched its trending sensation, Drive-In Theatre. Limited spots have been snapped up by patrons longing for performances. Two more shows through August will be presented: July features âRounding Thirdâ and August âThe Roommate.â Those who experienced âLove Lettersâ praised the experience.