The evening will include musical theatre performances, fun and an energetic mix of central Iowaâs lovers of the stage. 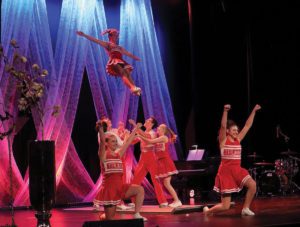 Cast of Des Moines Young Artistsâ Theatreâs âBring It On the Musicalâ perform at 2018 Cloris Awards.

Late summer of 2014, right when the 2014-2015 local theatre season was starting, a small group of advocates for the local theatre scene gathered. The subject was a community recognition awards event to celebrate the thousands involved in presenting stage productions. The goal was simple: create a metro-wide annual event where different aspects of theatrical performing arts excellence would be recognized by its peers and patrons. That founding group consisted of Zachary Mannheimer, Marnie Strate, John Domini, Michael Morain and me.

A first challenge was what to name the event. Other communities had such programs, including the Helen Hayes (Washington, D.C.), Joseph Jefferson (Chicago), Ivey Awards (Minneapolis-St. Paul), Henry Awards (Denver), and, of course, the most famous, the Antionette Perry Award for Excellence in Broadway Theatre, better known as the Tony Awards. Greater Des Moines needed its own such event, as the central Iowa theatre scene brings tens of thousands of patrons together to savor the experiences some dozen established and independent theatre companies deliver on stage. What name could embody the uniqueness of this region and these awards?

Cloris Leachman. Her name immediately came to the fore. This group decided we needed to contact her to get her blessing. Through a series of connections, I was able to arrange a time when Leachman said I could call her. Although somewhat nervous about so directly reaching out to such a celebrity, I made the call.

âThe answerâs yes,â was the abrupt and enthusiastic response, cutting off my carefully thought-out introduction and inquiry. Her voice was immediately recognizable. âIâd love to be part of this.â

And, so, the event was christened. Leachman personally attended the 2016 awards event. She was given full celebrity treatment throughout a long weekend of multiple appearances, culminating with the Sunday evening Cloris Awards ceremony. She had presented at the State Historical Society auditorium the day before, keeping then-Governor Terry Branstad off-balance with her comedic antics while accepting a state proclamation and award honoring her career. The pressing of her handprints in clay now are part of the museumâs âHollywood in the Heartlandâ exhibit. She visited her alma mater, Roosevelt High School, where she met with the drama class.

After those initial two years in the Des Moines Social Clubâs Kum & Go Theater, the event outgrew the space. Robert Warren and Hoyt Sherman Place welcomed the Cloris Awards and continues to host the celebration in the beautiful performing hall of its theatre. The awards event will continue what it started last year by making this celebration free to the public. The all-volunteer team of judges and producers decided that such a celebration needed to be accessible to the entire community. The judges, now six, spend the season adjudicating the seasonâs shows. Denis Hildreth, Eric Olmscheid and Robin Vanderhoef are part of the expanded team. The judges lost a great team member this past May in Jeanne M. Hopson, whose legacy will live on in these awards.

This past season included 45 different productions presented by 12 different companies. On behalf of the Cloris Awards judges and team, we invite you to celebrate with us on Sunday, Aug. 25 at 7 p.m. at Hoyt Sherman Place Theatre. The evening will include musical theatre performances, fun and an energetic mix of central Iowaâs lovers of the stage.

For a general overview of the upcoming season of regional theatre productions, visit the calendar maintained by Timothy Rose at âA Gentle Guide to Des Moines Theatreâ (www.gentleguidedsm.com). For detailed information about each production companyâs season, please visit their websites. Each company will provide information about upcoming productions, season tickets, synopses of shows and more.

We look forward to seeing you at the Cloris Awards. www.clorisawards.org

John Busbee is the 2014 recipient of the Governorâs Award for Collaboration & Partnership in the Arts. He believes that the arts is a contact sport and finds worthy initiatives in which to be involved. The Cloris Awards is one such project that benefits the Greater Des Moines community, sharing a strong legacy of locally produced theatre.