Newspaper tycoon Pulitzer versus paperboys in historically based musical 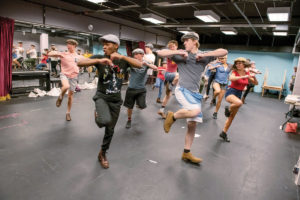 The Des Moines Community Playhouse has developed a strong reputation for delivering lavish Broadway musicals. In this centennial year, it will roll out an eagerly anticipated one: âDisneyâs Newsies The Broadway Musical.â This smash hit show, based on the 1992 film, is inspired by the New York newsboysâ strike of 1899. Publishing giants Joseph Pulitzer and William Randolph Hearst raise distribution prices at the expense of the delivery boys, Jack Kelly and friends, all
teenage ânewsies.â As Jack dreams of leaving the city to escape his orphaned and poverty-stricken life, he meets Katherine Plumber, the young reporter interested in getting an exclusive for the Sun, and they join together to fight for whatâs right.

Filled with high-energy action and dance numbers, this musical comedy-drama is fun for the whole family. It also is an excellent summer musical offering, keeping
the Playhouseâs relatively new tradition of giving patrons a seasonal offering that will appeal to all generations. This show garnered eight Tony Award nominations in 2012, winning two (Choreography and Best Score), as well as six Drama Desk Award nominations, winning two (Choreography and Music). This Des Moines production will run for four weeks with 18 performances.

â13â IS A LUCKY NUMBER FOR THEATER-GOERS

Evan Goldman is plucked from his fast-paced, preteen New York City life and plopped into a sleepy Indiana town following his parentsâ divorce. Surrounded by an array of simpleminded middle school students, he needs to establish his place in the popularity pecking order. With his bar mitzvah just around the corner, can he find his place at his new school, adjust to his new normal and throw a legendary party?

Thatâs the story line driving this coming-of-age musical featuring a cast of 22 that consists of 12- to-15-year-olds. Des Moines Young Artistsâ Theatre has nurtured its talent pool of young artists, and recent shows demonstrate the success of their strategy. Artistic Director David Vancleave, also directing â13â with co-director Brittany Beridon, is proud of how this regionâs youthful performers have responded to the age-appropriate casting this company encourages.

âWe believe that it is important for young people in our community to have the best opportunities to develop their stage skills. Des Moines Young Artistsâ Theatre
does this.â

John Busbee is a creative project developer, critic, playwright, author, producer and media professional. He has produced his weekly show, The Culture Buzz,
on KFMG since 2007.