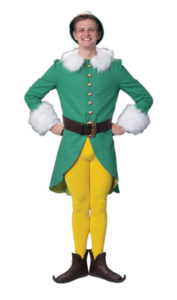 While Americaâs marketing machine ramps up into full force not days or weeks but months before the holiday gift-giving season, regional theatres will offer wonderful escapes for us to consider. Live performances are sprinkled on the calendar like candy confectionary on sugar cookies, giving us delicious cultural consumption opportunities.

One big offering is the ambitious holiday musical at the Des Moines Community Playhouse, âElf â The Musical.â This appealing story has a strong following thanks to its origins, the hit 2003 movie, âElf,â which proved to be a star vehicle for Will Ferrell. This Christmas story follows a human who mistakenly is transported to the North Pole and is raised as one of Santaâs elves. When a grown Buddy, named for the diaper he was wearing when he first arrived, is told that he is human, he is given a quest to help his real father in New York City. The misadventures take a variety of twists and turns, eventually giving everyone the happy ending that was hoped for.

When asked about the challenges of creating a stage musical based on such an iconic film, the showâs director, Maxwell Schaeffer, explained, âWell, the challenge is, itâs not just a classic funny holiday film. Itâs also a Will Ferrell vehicle. So… itâs doubly challenging and brave to attempt that transition. Fortunately, the charm of the Buddy character is what drives the success of the show, and itâs not necessary to find an actor who will mimic Will Ferrell. Our guy, Mitch (Mitch Kedzior), is just the right guy to play Buddy, and I think audiences will fall in love with him. Many of the favorite, funny moments from the movie are right there, and, in my opinion, the extremely catchy, entertaining, old-school brassy Broadway score is very satisfying.â

Schaeffer continued to share why core themes from this stage version work so well, stating that this show includes âclassic stage comedy, strong ensemble characters, a love story, quick pacing and the kind of delightful, combustive choreography that surprises an audience.â

The Playhouse continues celebrating its 100th season with a variety of headlining musicals and shows, and âElf â The Musicalâ is a strong anchor for its holiday season spot. Only a handful of community theaters in America can boast of similar tenure when it comes to serving as a regionâs anchor community theater. Presenting a big holiday show is a fairly recent addition to their annual planning, a tradition that has been enthusiastically embraced by its patrons.

Schaeffer responded to a question about what makes a classical holiday-themed story with, âI think there are 10 or 15 classic Christmas tales, and they all share the same themes â childlike faith…the complete belief that something magical is possible, in the face of cynicism, doubt and disbelief. We all read them or watch them played out on the stage because we all want to capture the feeling that our deep, almost instinctive belief in the spirit of Christmas, secular or sacred, is, once again, validated.â

That stacks right up there with the 1897 New York Sunâs editorial response to a doubting little girlâs letter by replying with the famous editorial, âYes, Virginia, there is a Santa Claus.â Letâs add to that, âYes, Des Moines, there is a Christmas elf.â

One of this columnistâs first performing arts memory is experiencing the magic and music of âThe Nutcracker.â This region is blessed with several options to introduce young ones to the magic and fantasy of this class performance and to allow older ones to fondly remember their first âNutcracker.â Dancenter in Ames presents Dec. 8-9 at Stephens Auditorium; Ballet Des Moines presents Dec. 7-9 at Hoyt Sherman Place Theater; and Iowa Dance Theater presents Dec. 15-16 at the Civic Center of Des Moines Performing Arts.