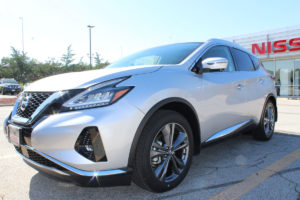 Welcome to our new Cars in the City column in CITYVIEW, where weâll feature a test drive of a vehicle from a local dealership.

For our initial voyage, I sought out the 2020 Nissan Murano Platinum, an all-wheel drive SUV with smooth features. I found five different cameras, mounted on all sides of the car, making safety a top feature. The vehicleâs âIntelligent Mobilityâ gives drivers assistance in case of obstacles and other hazards on the road. After all, who doesnât encounter at least a dozen distracted drivers on I-235 from the west mixmaster to downtown?

The Muranoâs front and side cameras sense when objects, people or animals appear suddenly, applying an emergency brake. The motion sensor detection alerts the driver to movement, similar to a backseat driver, but not in an annoying way. If you begin to drift off the center line, youâll hear a beep or a ânudge,â reminding you to pay attention.

If youâre discussing with your passenger which pub to eat at, encourage him or her to read our latest âBelly Upâ column. Or, you can fire up your hands-free smart device and ask Siri for suggestions. Technology is foremost as you connect with Apple CarPlay or Android Auto on the Bose sound system.

One feature I tried out on Interstate 80 was the adaptable cruise control located adjacent to the heated steering wheel. As I set the cruise at 74 mph, the three bars indicated there was a vehicle 15-car lengths ahead. As the vehicle ahead slowed, my vehicle slowed to 69 mph. In heavier traffic, switch it to one bar, which is five car-lengths ahead. I found it to be a great âset it and forget itâ feature.

Backseat passengers arenât ignored in this vehicle and can enjoy charging ports for smart phones, heated seats and rear temperature controls. A cool feature is the dual panel panoramic moonroof so backseaters can soak up some rays.

Shoppers can rejoice by kicking their heels up â literally. Imagine carrying out four sacks of groceries, while the car keys are buried in the bottom of your pocket. Instead of fumbling for the key fob while the apples tumble to the pavement, you give the underside of the liftgate a swift kick, and voila! â the lift opens. Itâs like having a doorman for your vehicle.

Safety again abounds with windows. When rolling the windows up, if little hands are soon to be squished, they wonât be, thanks to a motion sensor that detects objects and stops the window from closing.

Callin Prieskorn, sales consultant at Hummelâs Nissan, says the Murano debuted in 2003. He proudly announces that Hummelâs is the biggest selling Murano dealership in the nation. He credits the drivability of a sedan, along with an all-wheel drive for harsh Iowa winters. He says, âItâs quite a title. Weâre known and respected among Nissan dealerships.â

After driving the Nissan Murano, I discovered two things. The Murano is an incredibly smooth, easy and refined drive. The second? Writing this column could prove to be an expensive endeavor.