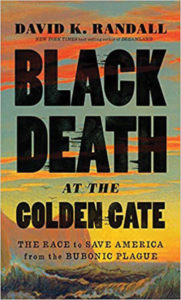 âBlack Death at the Golden Gate: The Race to Save America from the Bubonic Plagueâ

Both fascinating and frightening, this tale of the entry of the bubonic plague into the continental United States has elements that should sound familiar to the reader. The first victim of Yersina pestis (the bacterium that causes plague) was a Chinese immigrant in Chinatown in San Francisco. Dr. Joseph J. Kinyoun, an officer of the Marine Health Service (later the Public Health Service), used his expertise in the new science of bacteriology to identify the illness as bubonic plague. His attempts to contain the disease with a quarantine of Chinatown and other measures were met with resistance from city and state officials. There were elements of racism, corrupt politics and inaccurate press coverage throughout the incident. His successor, Rupert Blue, was more adept at dealing with the public. He was able to identify the source of the plague (fleas from rats) and establish an eradication program that resulted in a reduction in the rat population and thus the spread of the disease. This is a very interesting part of our history that is little known. Randall writes an informative and a timely tale of the treatment of epidemic diseases. ♦ 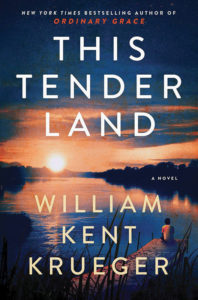 âThis Tender Landâ begins in the summer of 1932, when four orphans have no choice but to flee the abusive adults in charge of the Lincoln Indian School in southwest Minnesota. Twelve-year-old Odie and his 16-year-old brother, Albert, are the only two white students at the school, and they, along with their best friend, Mose, are joined by 6-year-old Emmy, whose mother had been a teacher there. As the children make their escape down the river, hoping ultimately to find family in St. Louis, they are challenged by the hardships of the journey amid the early years of the Depression. The story is also told of the redeeming love of friendship and the struggle to believe in a God who can be both a destructive tornado and a loving shepherd. Odie is a talented storyteller, with words and with music. As their tale unfolds, I was reminded of the writings of both Homer and Mark Twain. This is William Kent Kruegerâs second stand-alone novel and has everything his fans have come to expect including well-developed characters, complex situations and beautiful, descriptive language. ♦