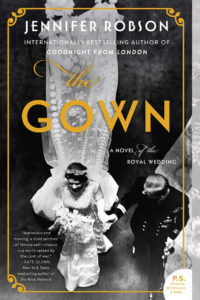 âThe Gownâ tells a beautiful story set in 1947 London, when England is still recovering from World War II. Ann Hughes and Miriam Dassin are two talented embroiderers at the famous fashion house of Norman Hartnell. They have been selected to create the wedding gown and train for the upcoming royal marriage of Princess Elizabeth to Lieutenant Philip Mountbatten.  Intertwined with their experience is the present day story of Heather Mackenzie from Toronto, who has inherited a box of hand-stitched flowers from her grandmother, who turns out to be Ann. When Heather discovers that the flowers match those on Queen Elizabeth’s gown from 70 years earlier, she travels to London to learn her grandmother’s story before Ann emigrated to Canada in 1948 and started a new life. The details in the creation of this hand-sewn, hand-embroidered gown and train are fascinating in and of themselves and demonstrate how skill and craftsmanship are transformed into art. ♦ 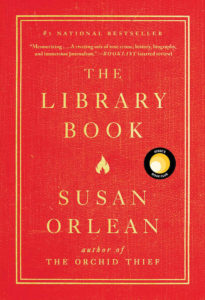 Childhood memories of blissful visits to the public library came flooding back to author Susan Orlean when she visited the Los Angeles Central Library with her son in 2011. While she had long since forsaken libraries in favor of purchasing books, the writer was overwhelmed by the beauty of the building and her sense of the magic in its contents. Upon learning that the building had been nearly destroyed by a 1986 fire that was ruled arson, her investigative instincts kicked in. This captivating book fits into no genre. In part it is a thorough investigation of the fire, the alleged arsonist, and the charges against him. It is also a look at the history of Los Angeles, its public library, and the array of interesting characters who have led it. It examines librariesâ almost constant transformation and the range of issues faced by all urban public libraries in the 21st century.  Most of all, it is a tribute to the institution of the public library with Orlean somehow making the smallest detail of the inner workings of a library seems fascinating.

Susan Orlean will appear in Des Moines, Saturday, March 30 at Capital Square as part of the libraryâs AViD series and the DSM book festival. ♦