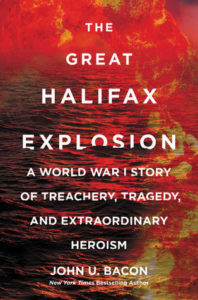 During World War I, the city of Halifax was a prominent shipping port for military supplies, as crossings from North America to Europe became increasingly perilous. The French freighter Mont-Blanc sailed from New York in December 1917 loaded with tons of explosives and headed to Halifax in hopes of finding a convoy that would accompany it to Europe. What happened after the Mont-Blanc reached the harbor in Halifax would be a disaster of proportions comparable to the San Francisco earthquake and the Chicago fire.

After the collision with another ship in the narrows leading to the harbor, the resulting fire led to the abandonment of the Mont-Blanc, which then ended up at the Halifax pier. Since no one at Halifax was aware of the contents of the ship, no evacuation was ordered. The explosion with the ensuing fires, shock wave and tsunami devastated the surrounding area, killing 1,600 instantly. This response by citizens of Halifax and the aid sent by cities, most notably Boston, is an inspiring story worth remembering today. ♦
â Reviewd by Harriet Leitch 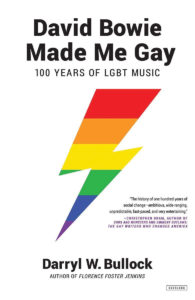 âDavid Bowie Made Me Gayâ is a comprehensive look at the positive impact LGBT performers have had on just about every musical genre, focusing specifically on the last 100 years. Beginning with jazz, followed by blues, country, rock, punk, rap and more, Darryl W. Bullock shares with the reader his extensive knowledge of the music industry.

This is much more than a history of music book, though. Bullockâs compassion for the human stories of the artists and their affirming impact on fans drew me in. It might have been more entertaining to go for a more gossipy, flamboyant or campy tone; to his credit, he never crosses that line.

Instead, it celebrates and respects the way LGBT musicians have responded to societal pressures through the last century, experiencing cycles of acceptance and rejection, hatred and fear, support and ostracism, without forgetting the toll that AIDS, suicide and denial have taken. ♦
â Review by Shirley Shiffler