Ankeny venue is a winning trifecta of liquor, food and live music. 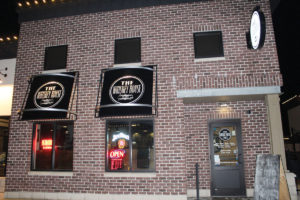 When youâre searching for a date night or a fun evening with friends, you might have to go to several places. One stop for cocktails, another for dinner and yet another venue for live music. Look no further. Thereâs a three-in-one spot that does a decent job of providing all three amenities: The Whiskey House and Bourbon Grill.

Located in Ankenyâs Prairie Trail development, the place was opened in 2016 by former Whiskey Dixx owner Uriah Mixdorf. Itâs not to be confused with the Whiskey River in Ankeny, which opened the same year in another Ankeny development, the District. Apparently the two bars each picked their own name, with neither budging on a name change.

The Whiskey House has approximately 400 types of bourbon and whiskey from nine different countries â the largest selection in the Des Moines metro. Thereâs one for every taste, from small batch, to higher priced Johnny Walker Odyssey and Old Rip Van Winkle, to an even-higher priced Macallan 25 year Sherry Cask, which costs $350 for a shot.

Drinks also include fresh-squeezed juices. Their whiskey sours are dry shaken before with egg whites and sugar. The chef brandies cherries for their old fashioneds and manhattans and offers hand-made bitters.

The menu strives to be a âscratchâ kitchen, according to head chef Nick Kubal. Items such as poutine, chimichurri chicken and pancetta mac and cheese grace the menu.

The inside dÃ©cor is a dark wood with whiskey barrel decorations. An outdoor patio overlooks downtown. A cigar humidor contains several dozen cigars. High-top tables, along with regular tables and several curved booths add to the mix. A comfy white couch and easy chairs are tucked in the back, offering a quiet, intimate setting, ideal for sipping whiskey and chatting with friends.

Live music at the Whiskey House isnât an afterthought, as some bars decide to clear out a few tables for a performance. Here, youâll find a raised stage with track lighting offering great acoustics, resembling a jamming night club.

Wednesday evenings feature dueling pianos Sam and Adam. Thursday nights, a one- or two-piece acoustic group performs. Friday and Saturday evenings, local bands perform with a $5 cover charge. Most recently on the lineup were Sons of Gladys Kravtiz, Final Mix and Bob Pace.

So the next time youâre in Ankeny â oh, heck, itâs even worth the trip â make a stop at the Whiskey House. ♦