Classic cocktails are shaken, with a spin. 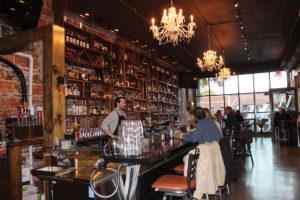 Take a walk inside the Winchester Pub in Valley Junction, and youâll find the bartenders shaking things up â literally. After theyâve poured the quality spirits and fresh ingredients into the silver shaker, the bartenders expertly create their handcrafted cocktails one drink at a time. Theyâll top it off with a dash of nutmeg or a twist of lime and â voila! â the cocktail is ready to be savored.

The new bar features classic cocktails with a spin. Signature drinks include Old Fashioneds and Manhattans made with handmade bitters. As Brewmaster Mike Gauthier explains, bitters start with a non-flavored alcohol and are infused with various flavors, including apple cinnamon and black walnut. Then, when the flavored bitters are mixed with the cocktails, the drink flavor remains intense. One patron remarked about the garnish on his Old Fashioned, saying it looked like an olive, but it was actually a brandied black cherry.

Signature cocktails are created by head bartender Derek Frodl and are priced from $9-$13. He says creating classics, such as âButterfly Effect,â made with Titoâs vodka, honey, lemon and butterfly pea flower syrup, is like cooking.

âI find out what certain flavors work together. Iâm constantly trying to figure out the right ratios,â he explains. âA bartenderâs work is never done.â

The Winchester was opened on May 2 by co-owners Justin Clark and Ryan Cooper â who also owns Cooperâs on 5th. The bar features prohibition-era dÃ©cor with glass chandeliers hanging from the high ceiling, dark wood and a stained-glass-Tiffany-style lamp dangling above a roomy booth. A wall containing hundreds of liqueurs and spirits sits behind an L-shaped bar.

The large shelves, which house the liquor bottles, were stained and erected by Derek and Mike. With original wall bricks, the shelves were tricky to install.

âWeâd stand back and think it wasnât straight,â says Mike. âWe didnât want the initial look to be symmetrical. We did one section at a time. Now weâre pleased at how it all turned out.â

Thereâs no kitchen, but a cheese and snack tray is available. Next year, the owner plans to move Cooperâs restaurant next door so bar patrons can order food.

In addition to craft cocktails, they feature house cocktails, wine and happy hour specials, starting at $2.50. Local beers are offered, and they make their own âWinchester Pub Ale,â which is brewed by nearby Fox Brewing. The bar plans a prohibition-theme party this winter.

The bar was set to open in time for Thursday farmers markets this past spring. Bar Manager Lindsay Simmerman says, âThe paint was still drying, but we managed to open when we said were. People enjoy the familiar classic cocktails.â ♦