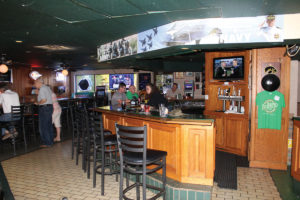 Since 1983, Urbandale folks have kissed â or at least touched â the worn blarney stone located at the entrance just outside Mickey Finnâs. The neighborhood bar, located off Douglas Avenue, is tucked in a strip mall next to the fire station.

The bar has its own charm, with wooden walls and various seating options, including booths, tables and barstools. The low ceiling adds to the coziness as do a handful of televisions and jukebox music. The Hawkeye and Cyclone teamsâ mascots are emblazoned on the wall behind the pool tables. Football watch parties for the Iowa Hawkeyes include drink specials, prizes and a grand prize at the seasonâs end with a trip to Las Vegas.

A visit wonât bust your wallet, especially on Wednesdays for happy hour with two-for-ones on (strong!) well drinks and domestic beers. A late-night happy hour includes $2 drinks, as well as other nightly drink specials.

On a Wednesday evening, a group from a nearby Catholic church stopped by for drinks. The group of 10 chimed in with why they frequent Mickey Finnâs every week.

One gentleman explained they see each other at church on Sundays but donât have time to talk. Another lady explained, âWe tried another Urbandale bar up the street, and I think they only wanted young people there. This place welcomes us, especially the bartender, Sarah. The free popcorn is good.â

When asked if the bars and churches go together, several men enthusiastically replied âYes.â One replied, âA lot of us volunteer during the day. One works for the food pantry, another for the Habitat House. We work hard so we can play hard.â

Bartender Sarah Chaplin says they get a good mix of patrons of all ages but with one thing in common: âEveryone who comes in is a regular here,â she says.

A retired police chief looked puzzled as he walked in, glancing at my notepad and camera placed in âhisâ spot at the bar. Sarah pointed out another spot, cleared an empty beer bottle and poured his usual drink.

âTheyâll have a pub crawl on Douglas; itâs good for all the bar owners,â he says. âWho doesnât like an Irish bar?â

The bar, which opens at 9 a.m. on weekdays and closes at 2 a.m. most nights, doesnât serve food except for a Monday steak night. A âPrice is Rightâ happy hour brings in people for daytime drink specials and prizes. Bill says their bar was one of the first in the metro to have the game show watch specials.

As the night wore on, Sarah greeted yet another customer by name.

âYou really get to know the regulars and their life stories. It makes it fun to bartend here,â she says. ♦