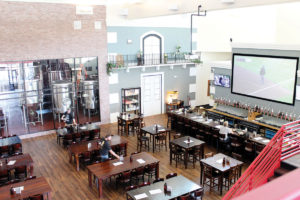 Mistress Brewing took up space in the
former Dahlâs in Ankeny in October of 2018.
They offer tasting flights and taproom tours.

Two Ankeny businessmen, Shawn McNeeley and Jeff Heng, have taken on a mistress, which Shawnâs wife is OK with. But this mistress is something everyone can enjoy â Mistress Brewing.

Mistress Brewingâs first location in Ankeny opened in 2016 with a mere 2,400 square feet. With ambitious goals, the owners moved the business into the former Dahlâs in October 2018, bumping up their brewery to a whopping 18,000 square feet.

A large portion of the building contains the brew house. With 26 assorted barrel sizes â from 4 to 40 barrels â beer is constantly brewing. Grain that is milled in a separate room is sent through a large white tube, eventually dumped for processing nearly 50 feet away.

A new canning system churns out 100 cans a minute. The owners test out small batches first, and if it gets the thumbs up, a larger barrel is created.

The tasting team includes Jeff Postal, a BJCP certified judge, and Sales Director Tim Negrete. Tim has home-brewed beer for 26 years, and now he is passionate about sharing his input.

âWhen I brew at home, its only 5 gallons at a time,â he says. âThis is a dream job.â

Mistress Brewing enjoys relations with other breweries, such as Twisted Vine and Fenders, where theyâve hosted âguestâ taps and beer collaborations. Local features include Sacrilegious Cider, wine from the Cellar at White Oak, and mead from East Grove Farms.

The inside taproom contains 20 tappers of craft beer, including the popular Summer Blonde Ale. Several VIP suites with comfy red couches offer a semi-private space. A mezzanine seating 70 guests overlooks the main taproom. The Barrel Room holds 100 people for private parties. Stacks of board games entertain visitors to the family-friendly joint. Local artwork livens up the dÃ©cor
but might not stay for long, as the artwork is for sale.

Although there is no restaurant at Mistress, a binder full of food delivery options is available and popcorn is free. In addition, food trucks often pull up during the
weekends.

A large events stage offers a variety of acts, from salsa dancing, to live music, to comedians. Friday nights are Randall Fridays, where brews are infused with
ingredients to create a unique flavor.

Tim knows there are many breweries in Iowa and says one ingredient sets their beers apart â water.