Discover the ‘secret’ of The Flying Moose 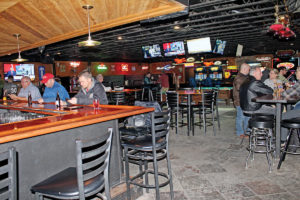 On a Monday night, the Flying Moose in Clive bustled with the after-work crowd looking to start the week off right with two-for-one drinks. But these bargain drink hunters donât need to leave at 6 oâclock, as this happy hour goes until 8 p.m. every night. And on select nights, hungry patrons can purchase $5 burgers, $2 tacos and $8 steaks.
Owner R.D. Summers was just 26 years old when he bought the place in 2012 and renamed it The Flying Moose. Since 1985, thereâs been a bar housed there, including the Fox Lounge, Bogeyâs and others. Itâs hidden just off Hickman Road, less than a quarter mile west of 86th Street.

R.D. says the happy hour is a big draw. When he first opened the bar, he put together a business plan. His real competition was not Clive bars; it was Des Moines metro area bars.

âWe looked to see how we could set ourselves apart from downtown and the West Glen area,â he says. âNobody else has happy hour until 8, so itâs something weâve kept going.â

And it works. Even though R.D. could guzzle unlimited drinks himself, he chooses not to and feels thatâs part of his business success. He stopped drinking alcohol five months before opening his bar.

âIt helps if the owner doesnât drink,â he says, referring to himself.

Thatâs another reason why the Flying Moose offers other options besides just booze. With two pool tables, a dozen big-screen TVs, video games and a new 4-player Pac Man Battle Royale, players can hang out to play, drink and eat.

âIf people want to come for just two beers â or stay and party four hours â we treat everyone the same,â he says. âItâs like a basement party all the time.â

Yet itâs also a place to conduct business. Monday eveningâs crowd consisted of a networking group and a pair recording a video.

Jacob Repp, who had just finished recording a Facebook Live marketing video, says he meets business contacts frequently at the bar. Heâs reluctant to give away the âsecretâ of the barâs attraction.

âItâs good for social networking events, especially if Iâm buying for clients, because they get two for one drinks and good food. Thereâs lots of space, and itâs not too loud,â he says.

A select demographic clientele doesnât frequent the Moose. R.D. says they pride themselves for offering a comfortable atmosphere to hang out by yourself or in a big group.

âWe have people from ages 21 to 71,â he says. âItâs a melting pot of everyone, local neighbors, chilling out and having a good time.â ♦