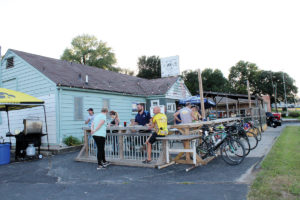 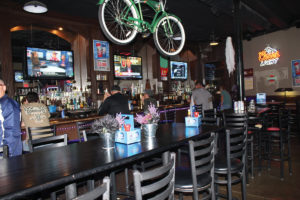 The Beaverdale area is a proud neighborhood tucked between the western suburbs and downtown Des Moines. Beaverdale boasts several close-knit bars in its downtown, including the Beaver Tap.

Located at the corner of Beaver and Urbandale, the location of The Beaver Tap accommodated various bars since the late 1950s. The Bon Ton (not the department store) entertained patrons for nearly 30 years until A.K. OâConnorâs took the place over. The Riley Drive Entertainment group established the Beaver Tap in 2011.

Inside the dimly lit pub, high-top tables with dark wood and black barstools sit next to the extended bar. Canned music played loudly from a set list of 1980s and 1990s music while more than a dozen people gathered, downing beers and mixed drinks.

Happy hour specials include dollar-off draws and wells. On select nights, two-for-one Fireballs, buckets and other specials lure thirsty customers in the doors. A kitchen offers a limited menu with burgers, pizza and appetizers.

Caryn Taphorn, bartender for two years, worked other bars in the Des Moines area but says the Beaver Tap crowd is diverse.

âThese are the most loyal regulars Iâve had the pleasure of serving â at all of the places Iâve worked at,â she says.

The Beaverdale Fall Festival is generally the busiest weekend, but the bar hosted its first televised fight nights
shown on big screen TVs in early October.

âWe had record sales that night â better than the festival,â she says. âWeâre looking to bring back more fight nights.â

The outdoor patio is a popular hangout on warm evenings, with bag games commonly played. Indoor games include a pool table and shuffleboard. Caryn says theyâre the only Beaverdale bar that provides games.

A number of bottled and tap beers are available, including Confluence and Exile, with beers changing monthly. A cruiser bicycle hangs from the ceiling and will be given away to one lucky patron on Dec. 1. To qualify, patrons need to buy a food item, with names entered in the drawing.

Colorful souvenir T-shirts are for sale with the logo, âI (Heart) Beaver Tap,â but with the âtapâ in tiny letters for those wanting a different meaning.

Caryn says the bar-like atmosphere is more laid back than their âsisterâ restaurant across the street.

âI like the people atmosphere. Every day we see all types of people. You can walk in and know someone here. We like to hang out and have a good time. We try to make it fun and interesting,â she says. ♦