Dive into The Boat House

Johnston landmark since the 1930s 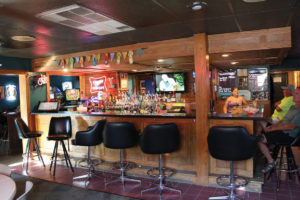 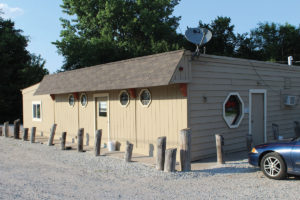 The name The Boat House conjures up a quaint place next to a lake or ocean. Although Saylorville is close, The Boat House in Johnston isnât off a beach or dock.

The Boat House, located on Beaver Drive, is kittycorner to Camp Dodge and the static aircraft display perched on the most scenic overlook in Johnston. Drive slowly and look up for a two-story-tall sign. After turning in the gravel driveway, donât despair â it really is the bar, even though the tan building lacks a sign. Instead, look for the lit Coors Light neon sign, dock posts or one of the five octagon-shaped windows, resembling a poor manâs porthole to go with the boat theme.

Inside, the dive bar furnishings include a mishmash of mismatched chairs and tables with black cracked leather bucket stools.

Nicki Benson, a bartender for eight years, says sheâs lived in Johnston her entire life. She points to the barstool saying, âI probably sat on this barstool in my car seat.â

Nicki explains the history of the bar and gestures, saying, âThis used to be a dirt floor. The bar was built in the 1930s after they put the military base in.â

Golfers from Hyperion, as well as military folks and law enforcement academy students from nearby Camp Dodge, stop in frequently.

âThe military guys and golfers are a pretty calm bunch,â she says.

Above the shuffleboard table is a wall of military medallions and memorabilia behind a glass enclosure.

âI just unlock it, and anybody can put their crest up here,â says Nicki. âItâs a way of recognizing our military.â

Off to the corner and next to the popcorn machine sits a banquet-sized table with free salty snacks. Costco-sized containers full of peanut butter filled pretzels and cheese balls beg patrons to wash them down with a decent array of well, call drinks and beer. For more sustenance, a Pasqualeâs frozen pizza can be popped into the oven.

One area worth mentioning is the womenâs restroom. If this were truly a dive bar, then it would have a broken door lock, and cold water would spray all directions from a corroded faucet. This bathroom didnât. With its bright colored flip-flop dÃ©cor, it makes a woman feel relieved and refreshed, instead of leaving the room saying âewww.â

Nicki smiles at the next customer as she dumps ice into his cup, filling it with Jack Daniels. More patrons pour in after a Camp Dodge summer concert and insert bills into the video jukebox, where a Guns Nâ Roses tune fills the bar.

âI love the people here,â she says, shouting over the music. âItâs just a great atmosphere.â ♦