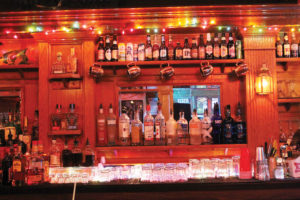 Admittedly, the name has caused some confusion outside the city of Des Moines, Iowa. Des Moines, Washington, also has a Des Moines Yacht Club â but it is devoted to actual marine craft. Then thereâs the Iowa City Yacht Club, a well-known music venue â with no affiliation to the central Iowa location.

âI think we were first,â co-owner Grayson Shimasaki chimes in.

He is correct. While the Iowa City enterprise opened in 2003, the Des Moines establishment has been around since 1985.

DeBolt and Shimasaki have been tending bar at the Yacht Club since 2001. When the owner decided to sell, the two men went in on it together and are celebrating three years as co-owners this month.

The bar reopens this month after being closed all of January for light remodeling. Old and torn-up booths against the west wall were taken out.

One major change at the Yacht Club has been the addition of live music Wednesday through Saturday nights. And not just cover bands. Local bands like Odd Pets, DJ TouchNice and The Tighten Up have played at the bar.

Shimasaki is a huge fan of local music â and music in general. Album covers and posters from Des Moines concerts that Shimasaki has attended decorate the walls. His taste is all over the board, with a poster from a Method Man and Redman show at Woolyâs to Bob Weir at the Val Air Ballroom, complemented by a Kurtis Blow album cover and The Beatles âSgt. Pepper Lonely Hearts Club Bandâ album cover.

On the surface, not much else has changed at the Yacht Club. Wood grain, dim lighting and twinkle lights set up an inviting atmosphere. Drinks still flow, and regulars still flock in to converse with the staff they love. DeBolt notes that itâs his customers â and the diversity of those customers â that he loves best about his job.

âWeâve got all sorts of different people coming in here, roofers to lawyers. Not that thereâs anything wrong with roofers,â smiles DeBolt. ♦