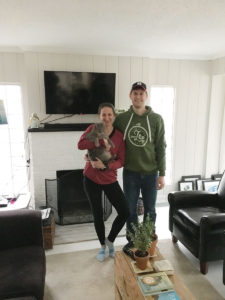 Andrew Schutt and Lyndi Buckingham-Schutt enjoy living in Windsor Heights, where they say they are close to âeverything.â

They got a taste of Windsor Heights living when visiting friends who lived there, making runs to Hy-Vee and visiting the dog park.

In particular, they liked the âsmall-town feel but living in a larger city,â Andrew Schutt says. They also appreciated the older homes.

So when a house came on the market that exceeded what they were looking for and fit into their budget, they took the leap. Theyâve lived there since April 2018 and have a cat, Beaker, and dog, Bunsen.

Their home was built in 1933 and has four bedrooms and 2.5 baths. It was renovated about five years ago, and the updates made a huge impression on them.

It had all this history, Schutt says, coupled with the niceties of a more modern home.

The kitchen is wide and open, and the master bedroom is tucked on the end of the house, making it secluded and quiet, says Schutt. The house sits about 60 feet from the road, which also helps with privacy.

Outside, they have about two dozen mature trees, which they enjoy (although, Schutt says he is constantly picking up sticks).

In addition to appreciating the cityâs trees, theyâre enjoying the easy access to the trail system. Schutt has been riding his bicycle more, and his wife is an avid runner. Theyâve gone on trips from their house to Dallas Center, all on trails. The dog park is a great benefit as well.
They also feel safe in Windsor Heights, Schutt says.

One perk they didnât come to fully appreciate until moving in was the cityâs proximity to other parts of the metro. They tell people theyâre basically 15 minutes from everything, he says.

In terms of home improvements, they have a few projects theyâd like to tackle, including fixing some outdoor steps and putting in garden beds.

The latter may be a little tricky. Since their many trees provide so much shade, Schutt says theyâll have to experiment to see what plants will thrive.

They would also like to address the entrances to their home.

They have a âreverse ranch,â with no visible entrance on the front of the house. There are three entrances on the east side. Theyâd like to close off two of the doors.

Simplifying the âfront door experience â thatâs a big one on the to-do list,â Schutt says. ♦