This âhouse dividedâ is still united. 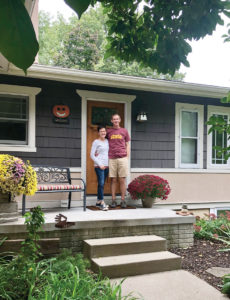 Beth and Brian Palmer enjoy their front porch as a favorite feature of their home. Photo by Marsha Fisher

On a crisp, fall Saturday morning, the Palmers are getting dressed for the day. Beth and son Owen, 14, are getting on their Hawkeye teamâs black and gold. Brian Palmer, Bethâs husband of 15 years, stands alone in his Cycloneâs cardinal and gold. Here in Iowa, that is called a âhouse divided,â and, at this house, a flag often flies, making that statement. Good-natured rivalry is part of the close family ties in the Palmer household.

Beth and Brian met in Ames, but it was after Beth, who was originally from Rockwell near Mason City, had graduated from the University of Iowa with a bachelorâs degree in nursing and had started working at Mary Greeley Medical Center in Ames. Brian, originally from Perry, graduated from Iowa State University with a bachelorâs degree in community and regional planning â hence, their allegiance to their alma maters.

After working in Marshalltown, Brian soon moved to Des Moines for a job with the City of West Des Moines. He temporarily moved in with his sister, Sandra, and her husband, Doug, in the same Beaverdale neighborhood in which their home stands today.’

âWhen I would come to visit,â says Beth, âI would look at the little green bungalow on the corner and wonder what it was like inside.â

About three years later, in 2000, she got the chance to see it when Brian bought it and the renovation began.Built in 1922, in the classic Arts and Craft style, the house had two bedrooms with a bath in-between, a galley kitchen, dining area, living room and a one-stall garage that was leaning toward the ground. Brian and Beth were married in 2004, and their son, Owen, was born in 2005, so the planning for the future began. Although Brian had a vision, Beth wasnât so sure.

âI was a little reluctant about the idea of remodeling, but I loved Beaverdale with its unique homes and beautiful trees,â she says. âThis house had an expansive yard and a great neighborhood with family nearby; Brianâs sister and husband, Sandra and Doug, and their children lived two doors away.â

Brianâs background in city planning and a few architecture classes allowed him to redesign the house addition in the craftsman style.

âI put in a âset-inâ second story in the âairplane additionâ manner. I tried very hard to maintain the original look of the house,â he says.

The Palmers doubled the size of their home, adding two upstairs bedrooms with attached baths, a large kitchen with extra-wide quartz center island, oak cupboards and spacious eating area. The upstairs bedrooms are over a two-car garage. On the first floor, the galley kitchen became a sizeable entry and first-floor laundry, with one of the bedrooms now being an office. The comfortable quality of the craftsman home remains in the massive living room with fireplace that replaced the walled off dining and living rooms.

Details of the remodeling maintain that craftsman feeling, also. All new doors are three-paneled oak, the new farmhouse sink sets below matching new oak cupboards, and repurposed cedar soffits were used in the front porch renovation as well as for accents in the home. The original tongue-and-groove wood flooring now gleams, with a refinished coat, beside the new slate tile.

âThere are always more things we want to do,â says Brian, âsuch as replacing windows, completing the partially finished basement and working on our backyard.â

However, they are a busy family with Owen now an eighth grader at Holy Trinity, Brian working as a building inspector with the City of West Des Moines, and Beth now a nurse at Iowa Clinic. Outside of their work and home, they lead an active lifestyle. The Palmers do many things together, including walking their black labs, Me2 and Phelps, biking and camping and taking annual trips to Colorado for skiing and hiking. Brian coaches many of Owenâs sports teams, which makes for constant family action. Nevertheless, every night they have time to choose from one of the three ice creams in their fridge, and, every Saturday in the fall, they cheer on their respective Iowa teams. ♦