Saturday, March 6, 2021
Join our email blast
At Home With

Making a house into a home. 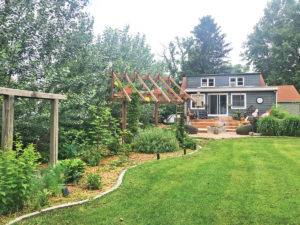 Among the features in the Fifeâs backyard is a bocce ball court.

Thatâs what Darren and Dena Fife saw in the Windsor Heights home on Sunset Terrace. The house needed renovating, and its huge backyard needed a vision.

âThatâs what we both enjoy â taking a space and making it your own,â says Darren Fife.

And they have. Itâs been three years since they moved into their home, which sits about a block away from Cowles Montessori School. Its close proximity to Cowles was key, so they could walk their kids â Olivia and Rylan, now 14 and 13 â to school.

Most of the work they did was in the first year. It was a complete overhaul, says Fife, and they tackled everything themselves (other than what required professionals).

They redid the kitchen, putting in poured concrete countertops along with a pebble path using stones from New Zealand, where Dena is originally from.

Initially, many of the changes to the house were aesthetic. Structural changes are coming soon, though. Theyâre just realizing how poorly the addition on the back of the house â where their living room and kitchen are located â was constructed, Fife says. They plan to raise the ceiling 6 feet. Theyâre also going to loft the master bedroom so it overlooks the living room.

The family converted the entryway to the home into a music room. Rylan plays the piano, Dena is teaching herself the guitar, and his ukulele collection is housed there, Fife says.

Many indigenous Maori art pieces, a nod to Denaâs Maori roots, are on display. The meditation pergola in the backyard has a Maori feel to it as well, he says.

The backyard also features a full-size bocce ball court, hot tub, native prairie, a shed made of 100-percent-recycled materials and a water feature that ârains,â with water falling from tall timbers.

They also planted 75 hybrid poplar trees, which are now an average height of approximately 25 feet. They grow extremely fast â they were the size of a straw when they were planted two years ago, says Fife.

âItâs very zen,â he says of their backyard space.

This is the third location the Fifes have lived in since moving to Windsor Heights 15 years ago. The city still has that small-town feel, and is âeverything you hope a community would be,â says Fife.

That includes its environmental work, with the City partnering in the efforts of the Walnut Creek Watershed Coalition, a nonprofit Fife started 12 years ago. Fife even relocated his business from downtown to Windsor Heights.