Five generations of the Dean family once under one roof 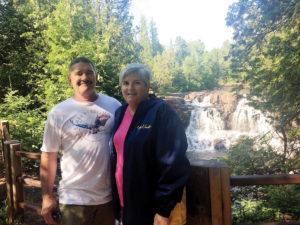 Richterâs parents bought the house in 1996 and moved to the suburb from Rochester, Minnesota. Her dad was offered a job in the city, which prompted the move south, and Richter â along with her two young daughters â was able to come with them when her job allowed her to transfer.

There were initially five members of the Dean family that moved into the house, but the home has seen an inflow and outflow of family members over the years. There were once eight people and five generations of the Deans living under one roof. Those eight were: Darcy; her husband, Scott; her mom, Sharon; her dad, David; her grandpa, Jack; her older daughter, Hillary; her younger daughter, Maddie; and Hillaryâs son, Jack (named after Richterâs grandpa). Richter also notes that, at its peak capacity, the home had anywhere from nine to 10 residents, with various friends of her daughters crashing there.

Currently, the house has four residents. Now living in the house with Richter are her husband, daughter Hillary and her son, Jack. Richterâs grandpa Jack passed away in 2015 at the age of 92. Richterâs parents moved out four years ago but are still close by. In fact, theyâre just two miles down the road in a townhome, and her daughter Maddie lives with them, too.

âWe actually fit in the house now; everybody has their own room. At one point, we were short one bedroom; the couches were occupied,â she laughs.

âWeâve had a variety of pets â lizards and guinea pigs, mostly dogs and cats,â she says.

Her daughter Hillary has always had an affinity for cats â and the home has seen several over the years â but the most tenured animal is a cross-eyed 14-year-old Japanese Chin named Yoshi. The newest addition is her daughter Maddieâs 1-year-old shepherd/hound mix named Pres â short for Present. ♦