Saturday, October 1, 2022
Join our email blast
At Home With

Pieces of history in a Sherman Hill duplex 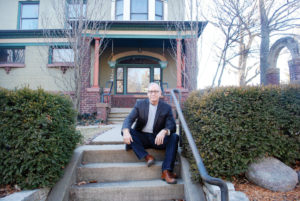 Go to therapy or do something with it. Two decades ago, Anthony Horvath took his own advice and started putting his collection of architectural salvage to use and now has a home to show for it. His Sherman Hill home has a lot of odds and ends to make it unique, and it wouldnât exist without all these pieces of history handpicked by its owner.
Sherman Hill is filled with picturesque Victorian-era homes. Horvathâs home appears similar on the outside, but the inside is a hodge podge of pieces from his architectural salvage collection. The home wasnât much more than a burned out shell when he purchased it in 1992. The renovation took years and he continues to update the home today.

âI was between relationships; thatâs what probably fueled the anger,â Horvath chuckled. âIt got me through the stress of renovating.â

Like many homes in the area, the home had been converted into a multiple-unit dwelling by a previous owner. The building contained six units when Horvath bought it. He has returned it to a duplex. The building wasnât the only thing that changed throughout the homeâs renovation. The yard also changed. After the city demolished the house next door years ago, Horvath bought the property and created a garden.

âThe front of the home was two kitchens before the renovations,â Horvath says. âI fixed up one side of the duplex, moved into that, and then fixed the other side â the side I currently live in. The Italian garden took an entire summer â the hell Summer.â

The other side of the duplex is currently rented out to a tenant.

It was a hellish summer, but he knows that it ultimately led to a big part of why he loves his home: his garden. A bonus of having a grandiose garden is the fountain, which drowns out the sounds of traffic. Horvath says the garden isnât just a place for him; itâs for the community. He frequently notices neighborhood kids and other visitors enjoying the space. A small wedding reception was held there once.

âIn the 1970s, this was a violent area,â Horvath says. âIt still was when I got here. The city wanted someone stable to be there. Thatâs where I came in.â

His garden was one thing that brought the community together. Horvath shared a story of poverty in the area and how it was a much more close-knit neighborhood back then. When his garden was being installed, neighborhood kids would run through the sprinklers because they had never really been around one. It caused a little trouble for him because of the muddy mess they made, but the people in the neighborhood â poor and otherwise â took it upon themselves to protect the garden. But Horvath says the good outweighs the bad when it comes to this neighborhood.

âThis home is tailored to me,â he says. âI got rid of the servant quarters and a bedroom. Iâm a fan of second-floor living rooms. I have that upstairs, and everything is where I want it. Itâs a pretty slick place to live.â

The home, built in 1898, has a historic feel that its owner appreciates. Horvath was careful to keep that in mind as he added modern comforts.

âEvery chair I have has to be comfortable,â he says. âItâs about livability and comfort.â

The kitchen has more of a contemporary feel with updated appliances, while his downstairs living room has more items that fit the original architecture of the home.

âI found a carpenter who was able to work with the salvage I had to make everything work together,â Horvath says. âIâve got stuff from a lot of different time periods.â

The banister that takes up a portion of the homeâs entryway was constructed with different woods from different eras. The floor throughout his main living room is a mix of three different wood floors from three different eras.
Horvathâs home has become a gallery of his expansive collection of salvaged treasures: A large mirror with a 1960s feel hangs on the wall in his second story living room, and just down the stairs, a stain glass window has its place by the door. He has carefully developed a unique style all his own.

âI like the historic feel, but Iâm not a historic preservationist,â he says. ♦