Tuesday, November 24, 2020
Join our email blast
At Home With

A house made of stories

In the Zacharias familyâs student-built house, memories are what count 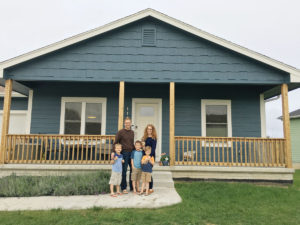 Stacy and Phil Zacharias with their sons Eli, Ian, and Otto

In the spring of 2015, the Winterset High School building trades class was in jeopardy. They needed a demand for projects to keep the program afloat. The class, taught by a contractor, provided students with the opportunity to build a house from start to finish, assisted by professionals every step of the way.

During that time, Stacy and Phil Zacharias were trying to move their five-member family out of a small, one-bedroom home on the east side of Winterset.

âI donât think we ever planned on having three kids in our one-bedroom house for as many years as we did, but we made it work,â says Stacy. By 2015, âIt was just time for a change.â

Then, there was a buyer for their home. But the pair had issues finding something that would work for them â so they temporarily moved in with Philâs parents.

Not long after they made the move, they learned of the high school building trades program. They were approved for a home, to be completed in spring 2016. Stacy and Phil were excited.

âYou save a lot on labor,â Stacy says, âAnd they get to have the program.â

And in the bigger picture, Phil says, âFor kids in high school to (be able to) drive to a neighborhood and say, âI was a part of establishing this neighborhood,â I think thatâs amazing.â

The Zachariases moved in June of 2016 â after a year of stopping by almost every day to see the students at work, bringing them donuts for breakfast and exploring the progress on the house.

âYou look around this house, and everything has a story,â says Phil.

Not only do they have the story of the house, but everything in it holds a memory as well. As avid bargain hunters, Stacy and Phil have sourced almost all their furniture from individual sellers. One charismatic coffee table came from an equally charming seller with a handwritten note: âA real nice table.â

Though Philâs job has provided him with opportunities to move to a myriad of other locations in the country, no place has appealed to him and Stacy quite like Winterset.

Soon, home will be a workplace for Phil, as it already is for Stacy, who owns Stacy Z Photography. Phil says we should check on them six months down the road.

âIâm sure we could have a â12 Things Not to Do When Youâre Working from Home with Your Spouse,â â he says. ♦