The inauguration of Mobergâs new building 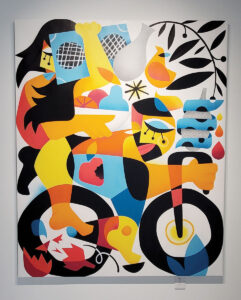 Moberg Gallery stayed busy during the pandemic by moving into its own building behind Noahâs on Grand Avenue. To open, they are showing off the new space and its tall ceilings with a large international show of big works. With Jason Woodside as curator, the exhibition âSwayâ brings together art from street to studio, outdoor to indoor walls, and includes familiar lines and color from Woodside, Adam Lucas, Itâs A Living, Maser, Pref, Adele Renault, Ruben SÃ¡nchez and Swoon; as well as new visions, with artists Evoca1, Elliott Routledge and Gary Stranger. Swoonâs âearth-erealâ portraits, Woodside and Maserâs âcolorcopias,â SÃ¡nchezâ abstract still lifes and sculpture, and Lucasâ city and townscapes, mix it up with typographic works of Pref, Itâs A Living,and Stranger, to inaugurate the new gallery.

Jason Woodside has been making exterior walls all over the world. His collaborative projects and commissions include high fashion and street brands, boutiques, galleries and museums, such as Colette in Paris, Adidas, Faberge and Obey Clothing, as well as the New Museum in NYC, Saatchi & Saatchi, and Jeffrey Deitch. His work in this show reminds me of the bright colors of his native Florida and Latin America.

Caledonia Curry, who exhibits her artwork under the name SWOON, is a classically trained visual artist and printmaker who has spent the last 14 years exploring the relationship between people and their built environments. She pastes portraits to city walls all over the world and founded Konbit Shelter as a response to the devastating earthquake that struck Haiti.

Evoca1âs âComforting Soundsâ is a quiet portrait of a young boy watching two birds alight. He holds bow and violin in separate hands, as if the birds flew out from between the two objects, as if the birds were music emerging from their contact. Evoca1âs palette is darker than the other works in this exhibit.

Maserâs âHalcyon Days 1â and âHalcyon Days 2,â spray paint on paper works, take flowers and shed them, skin them, bring them to life and take the looseness of this expression and turn it into a Matisse-like reduction. The color blocking behind the black blooms and leaves holds abstract space for these growths.

Elliott Routledge works with acrylic on canvas. His two paintings, âPareidolia 1â and âPareidolia 2,â look to be floating and sinking at the same time. A deconstruction of swimming pools and sailing, these flying parcels of canvas suggest a geography that canât be easily identified.

Spanish born Ruben SÃ¡nchez is a self-taught artist with a strong, colorful graphic style. Coming from the cultural worlds of graffiti and skateboarding, SÃ¡nchez learned graphic design and illustration. In the mid 2000s, he mixed the techniques and influences from each field, adding new skills on wood, resins, etc. with continued self-education in the arts, where he started translating his own vision onto canvases, murals, reclaimed wood, sculptures or installations. His work in the Moberg show uses both rich colors and black and white.

Gary Strangerâs screen prints âOrder Chaosâ and âBegin Againâ manage black and white on canvas as graphic precision reminiscent of 1970s branding. There are the binary and repetitious considerations, which are both problematic and inherent and indicative of circular and cyclical movement.

Adam Lucas works in acrylic and pastel on paper, âThe Left Will Buy Property on the Right Because Sooner or Later Everybody wants to Live on the Waterâ and âPlanted on the Balcony of a Hotel Motel with a Rundown Uptown Big City View,â offer views of what appear to be townscapes.

This show can be seen virtually or live during store hours. ♦