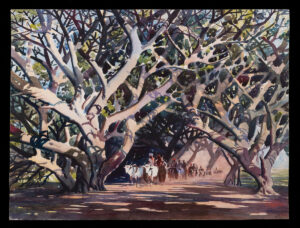 In December of 1866, 11 painters gathered in New York City to form what would later become known as the American Watercolor Society. At that time, watercolor was considered a lesser form of painting, the domain of amateurs and commercial artists. The mission of the AWS was to change that perception. Within 10 years of touring, showing and touting, that mission was accomplished with much thanks to Winslow Homer and Thomas Eakins, two renowned painters of the day. Watercolor, with its lightness of brushstrokes, lent itself particularly well to landscape painting, which was the most popular form of all painting in the post-Civil-War era.

âLandscapes in Watercolorâ is a selection of more than two dozen watercolors from the Des Moines Art Centerâs collections, created between 1885 and 1980. Organized by Associate Curator Jared Ledesma, these works reveal the unique ability of watercolor to capture the changing effects of light and weather on seashores, grasslands, forests and farmland. From thin veils of color to strong, bright brushstrokes, visitors will see the hand of each artist in depicting the natural world.

âThis gathering of exceptional watercolors offers our community a refreshing pause and a chance to appreciate this exuberant medium. And the technical merit these artists possess in producing such brilliant pictures is astounding,â Ledesma said.

The show also demonstrates the way that landscape changed after the original AWS artists. Abstraction, Japanese influences of ukiyo-e, manmade landscapes, historical continuity, and later groups like the Fort Worth Circle all played a role in redefining the medium over nearly 100 years of development.

One piece stands out as incorporating the most comprehensive collection of influences and changes. G.D. ThyagaRajâs âBanyan Treesâ is a masterpiece of implications, contradictions and ambiguity. Watercolor is not a medium for layering, yet ThyagaRaj manages to tell 2,000 years of ironic history in 22 by 29 inches of watercolor on paper. His banyan trees are lit in a demonstration of celestial reverence. These are the trees of Indian mythology, the trees of wisdom for Hindus, Buddhists, Jains and Sikhs. ThyagaRajâs trees also provide shade for merchants who in Colonial India held markets in their merciful coolness. The artist employs chiaroscuro to contrast the sacred and profane emanations of legendary trees. This is the technique of Rembrandt, Vermere and Caravaggio, rarely seen in watercolor.

Karl Mattern, a German born artist who taught at Drake for many years, shows âDeep Snow.â That painting resembles the Japanese equivalence of chiaroscuro, which contrasts whiteness and color rather than light and shadow. Elizabeth Millerâs âWolf Creek Passâ shows that this protÃ©gÃ© of Matternâs is learning her lessons well. Some watercolors chronicle Iowa history. Gwene Glasser Enghâs âCoralville Reservoirâ shows the Johnson County development in its infancy, the first 10 years when it killed trees and left behind their detritus. Richard Leet makes modern landscape look Biblical in âSpring Rain.â William Zorachâs âDes Moines from Brown Hotelâ shows downtown when it was as rural as urban.

Bernice Voshell Setzerâs âMountain Woodâ takes the visitor to a small village or large homestead built in a place that has no road in any direction. Thatâs a Walton Mountain moment. Bill Bomarâs âDune Grassesâ alludes to the moon as a ghostly galleon, from Alfred Noyesâ âThe Highwayman.â

This show will take visitors to places long gone and places never imagined, through Jan. 3. ♦