Classics thrive when not much is new 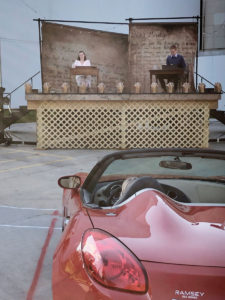 The art world lags behind the sports world in reopening â except in the public schools of Des Moines where they are recalcitrant to offer activities to the students. So, with no new exhibitions, gallery openings, live concerts, live drama nor opera, nonprofit institutions are going virtual, or remote.

The Des Moines Community Playhouse did the best job so far, featuring new productions with top-notch casts on a movie screen in the parking lot. Still, live theater, if only on a screen and car radio, is more interesting than rebroadcasts of old material that were filmed live years ago. Now The Playhouse plans to reopen indoors with two shows in repertoire and 35 percent capacity, Oct. 9.

Iowa State University has found something doable, too. âFOCUS: Critical Conversations with Artâ is an exhibition series that examines and highlights a single work of art, allowing visitors to delve into how we look at art, to promote questioning and discussion through art. With multiple perspectives, backgrounds and ways of looking at art, FOCUS invites the viewer to look closely at the visual world.

âBorder Crossingâ by Luis JimÃ©nez is the first such show. A new acquisition to the Art on Campus collection, the print offers âan excellent example of lithography, a poignant portrait of immigration, a connection to the Iowa State campus, a glimpse into the artistâs family and much more,â says the museumâs promotion.

A group of faculty members from diverse disciplines will participate to vary the points of view. âI had wanted to make a piece dealing with the issue of the illegal alienâ¦ People talked about aliens as if they landed from outer space, as if they werenât really people. I wanted to put a face on them. I wanted to humanize the immigrant,â JimÃ©nez said. This plays through Oct. 9.

If there is a silver-screened lining to the timing of the current difficulties, it is that it came after clouds, streaming and Amazon have made a huge number of grand old movies available anywhere. Here is my top 10 list of films made about historic artists of renown.

10. âThe Music Loversâ (1971). Ken Russell teamed with producer Harry Saltzman to make several films about great composers. This was the best, pairing Richard Chamberlain with Glenda Jackson in a love story about music, insanity and a gay man married to a nymphomaniac.

9. âBeautiful Dreamersâ (1990). A story about the friendship of Dr. Maurice Buck and his mental patient Walt Whitman. Colin Firth and Rip Torn star.

7. âImmortal Belovedâ (1994). Gary Oldman plays Beethoven in this story about the composerâs strange final will and speculation about the unnamed love of his life. Itâs not Rosebud.

5. âGirl with the Pearl Earringâ (2003). Colin Firth is Vermeer and Scarlett Johansson his famous muse.

2. âWhatâs Love Got to Do with It?â (1993). The best film yet about pop music. Angela Bassett broke out here as Tina Turner.

1. âMr. Turnerâ (2013). Mike Leighâs masterpiece about the great painter JWM Turner played by Timothy Spall. The cinematography is as gorgeous as the artistâs great works. ♦