Check websites before venturing out to the world that remains socially undistanced. 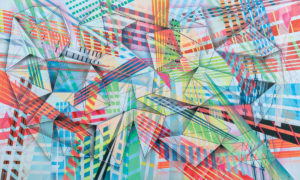 CITYVIEW has been following Chris Vance for nearly 20 years now. His paintings attracted us with an affinity for glee and an amazing sense of color and design. He has become the most popular painter in Iowa, at least in terms of the number of collectors also attracted to the fun times he expresses.

That glee, which fires a remarkable productivity, possibly stems from his large family that has grown up on the canvasses of his many shows. Vance created a universe of fascinating characters who always seemed childlike.

Vanceâs family has largely grown up now. That is likely reflected in his latest show, âDazed and Amused,â at Moberg Gallery. The artist has largely traded in his painting family of young-at-heart amusements for more serious meditations on geometrics and dimensions. He called this show âmy time to throw a curve ball.â

In âIn Search of Highland High,â Vanceâs shapes sometimes look as if they began as portraits of characters, dunce caps and all, before morphing into abstractions that are no less playful and bright than a farm full of children.

Michela Mullin, who wrote the catalogue for the show, calls âDragon Lairâ the generative and culminative work of the show. Like many Vance works, it employs many smaller pieces put together to comprise a larger work. The pieces are hung away from the wall, giving the overall work a chance to flirt with the third dimension. It seems to float toward the viewer, away from the surface.

In âBodhiâ (Sanskrit for enlightenment), Vanceâs intermingled shapes come together to resemble a lotus, the traditional symbol of enlightenment. In âVibes from the Ocean Parkâ geometric shapes give way to some that look more like protozoa and other things known through the microscope. Even so, the glee of Vance is celebrated in a dance that cannot sit still for its portrait.

Vance uses archival paper as medium for a series of new pieces. In âOut on the Open Road,â his expressive inclination to curvature and form flatten into multiple horizontal lines, stacked and crossed, meeting at the center of the lower and upper halves of the piece. Layering and composition lend a view that divides groundways and skyways, while turning the viewersâ heads in a way that Mullin calls âa gesture that feels like looking for traffic before a crossing.â

The curve ball with the most break in this show is a series of paintings to be viewed in a backlit ultraviolet room where five works in fluorescent colors are displayed as gleefully as popsicles or M&Ms.

Also displayed with Vance are four other compatible artists. TJ Moberg returns to the medium of dried paint skins, the stuff that forms on lids. âLost Keysâ has a more literal connotation the most abstractions. Keys are so often misplaced that some people think that âlostâ is their first name. With dried paints most people toss in the dumpsters, he fashions a commentary of obsolescence.

Robert Schulte, Jr.âs series of âFrisky Felinesâ complements Vanceâs show like a pet complements most kids. It places portraits of cartoonish cats in lineups within geometrically diverse shapes. Dennis Wojtkiewiczâs oil painting, âCitrus Series #21,â is a detail of fruit, seeds and all, which seems like a colorful lesson in microbiology. Artist Prefâs âYouâ and âMeâ are a green and blue couple whose relationship with each other is their story.

At press time, this show was being shown by appointment only. That was the case all over town to one degree or another. Check websites before venturing out to the world that remains socially undistanced. ♦