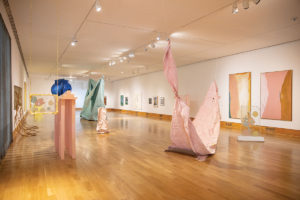 Karla Black is an abstract 3D art sculptor whose work explores the physicality of materials as a way of understanding and communicating the world around us. Her current retrospective at the Des Moines Art Center (DMAC) â âKarla Black: 20 Yearsâ â includes two site-specific pieces she created for the I.M. Pei gallery space, an area she was taken with on her first visit to Des Moines in 2018. It also includes 15 sculptures from the last 20 years that are exhibited next to paintings and sculptures the artist chose from the DMAC permanent collection. These include works by Louise Bourgeois, Helen Frankenthaler, Eva Hesse, Ellen Gallagher, Clause Oldenburg, Richard Tuttle, Jean Dubuffet and others.

Black was born in 1972 in Alexandria, Dunbartonshire, Scotland, and studied Sculpture at The Glasgow School of Art from 1995 to 1999. Her career took off the last 10 years. In 2011, Black was nominated for both the Turner Prize and was a representative in Scotland at the Venice Biennale. Blackâs work has been the subject of solo exhibitions at a number of international venues such as Modern Art Oxford and Kunsthalle Nurnbeg, Germany. The Des Moines show is her first to include both retrospective and site-specific works. It is also her first solo show in the United States.

Black uses mostly traditional art-making materials such as plaster, paint, paper and chalk in her work, along with a small amount of substances such as cosmetics and toiletries. Lipstick keeps appearing in confounding contexts. According to the museumâs quarterly publication, âher sculptures are either âalmostâ or âonly justâ objects and skirt amongst the mediums of painting, performance art and installation, often contrasting large scale with a fragility of form. Karla utilizes and plays with the physical properties of a wide arrange of materials. These materials could range from household items such as hand soap and toothpaste but also traditional supplies like plaster and cellophane. Black uses these materials in an aesthetically pleasing, yet raw and unformed, way. Her pieces show plasters and lotions smeared on the exhibit floor along with chalk crushed in small piles placed on fabric.â

Although Black identifies as a sculptor, her use of everyday matter mixed with traditional art materials works to expand the parameters of sculpture. Black says her works exist and operate as âalmost painting, almost installation, almost performance art.â Artists who have influenced her work include Frankenthaler, Karen Kilimnick, Lynda Benglis, Robert Smithson and Tuttle.

Black told a local group, âI am quite adamant that I make sculpture, though, that is difficult for many people to accept looking at it.â She added that she uses eye shadow and lipstick because âthe whole thing is rather made-up.â The exhibition features pastel colors, pinks, blues and greens. Much of the new stuff is laid on the floor. The show plays through May 16.

Also at the DMAC, Des Moines native Anna Gaskell presents her film âJudith Loves Martha.â Itâs a discussion with abstract expression pioneer Judith Godwin talking about the influence she felt in the 1950s after meeting modern dancer Martha Graham. This will play through May 17.