And Kooglians, who are not unfamiliar with Earth. 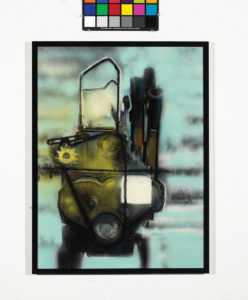 Hedda Sterneâs âImagination and the Machineâ brings a great artist from the WWII era back into mainstream awareness. The Romanian artist, a lucky winner of a wartime U.S. visa lottery, embraced this country like few of the artistic and intellectual genius of her ilk. Her show at the Des Moines Art Center shows her appreciation.

In 1961, Fortune magazine commissioned Sterne to visit John Deere factories in Moline and Waterloo and to reflect artistically. Sterne, at the time, was associated with both the Surrealists, who were a generation older than she was, and the Abstract Impressionists. She pretty much denied both groupsâ influences. According to biographer Shaina Larrivee, Tiffanyâs airplane machinery window displays and Long Islandâs duck-shaped buildings convinced her that America was more surreal than European Surrealism could ever be.

The DMAC show was originally commissioned by Fortune. That Henry Luce magazine was exploring the use of art to celebrate the industrialization of its famous 500 most successful companies. They sent her to John Deere factories to reflect upon tractors, combines and other farm machines. She synthesized a personal way of considering the machinery by deconstructing them. Deconstruction, mostly an invention of Algerian philosopher Jacques Derrida, was brand new even to intellectuals in post WWII circles. Yet Sterne chose to portray the machinesâ individual parts rather than their assembled magnificence.

Like Mount Pleasantâs annual Old Threshers Reunion, this show is for nostalgic farmers and old mechanics. Itâs about the beauty of six-cylinder engines, drive and transmission housings, and even tractor seats â all out of context. In fact, she rued the fact that the farmers who best knew their machines might not recognize the parts she portrayed. Sterne embraced America completely, unlike many of her European refugee compatriots, saying that art was an essential means to reflect upon travels. She also said that the Midwest better portrayed the majesty of America than anything she saw driving from New York City to Alaska with her husband, the famous New Yorker cartoonist Saul Steinberg.

Frank Hansenâs âYou Canât Brain Wash a Filthy Mindâ at Moberg Gallery was the popular local artistâs first major solo show in six years. Hansen has always stored his paintbrushes with freakish characters. He now has created a complete cosmology to explain that.

âAll my characters are from the planet Koogle. You call them freaks; they say that youâre the freak. This is photorealism,â he explained.

Kooglians are not unfamiliar with Earth. Subjects in the show deal with colonoscopies, failed tryouts to become Disney Princesses, child care, guitar therapy, and bonsai. Hansenâs galaxy pays homage to Sid and Nancy of punk rock fame (âThe Odd Coupleâ) and to the late artist Mark Kneeskern (âMoon Over Markvilleâ) and his widow (âShannon Sings the Blues Awayâ). Hansen also said Kooglians believe in a barter system. He has done commissions for new tires and many other things.

Always of interest in Hansen shows are the painting surfaces. He repaints some paintings including those of other artists. He scrapes and sands surfaces for added textures. He has also acquired new paints he had not used before now. Reddish purple washes are featured frequently.

Olson-Larsen Galleries will open its Monochrome exhibition Feb. 21. Michael Johnson will demonstrate the majesty of Midwest landscapes in black and white photography. Imagine what Ansel Adamsâ work might look like had he never traveled west of Nebraska. Randy Richmond shows off photographs that honor the historic methods of the process. Debra Smith presents her latest fabric collages, including pieces of quilts and Japanese kimonos. ♦