The big, the small, the playful and the deadly earnest 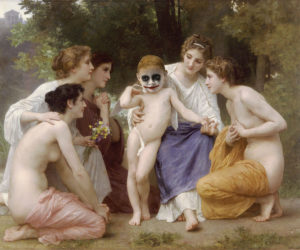 The latest show at Moberg Gallery illustrates the diversity of that galleryâs artists. Three are showcased here. One spells her name entirely in upper case, another entirely in lower case. One is as playful as the childrenâs playthings he recreates. Another is as deadly earnest as any artist. One studies big picture architecture of cities. Another makes toys.

Caledonia Curry, who exhibits her artwork under the name SWOON, is a classically trained visual artist and printmaker who has spent the last 14 years exploring the relationship between people and their built environments.

âShe had a rough life growing up. Both her parents were addicted to drugs, and itâs a wonder she made it out of that cycle. Now she gives back to the things that rescued her,â explained gallery manager Ryan Mullin.

Indeed, SWOONâs considerable reputation (Mullin says that showing her work raised the galleryâs profile to a new level) has been earned as much by the things she does as the works she creates. Based in Brooklynâs Redhook, she began as a street artist, wheat-pasting portraits to the walls of cities around the world. Her public practice expanded to using art to rebuild communities and humanize todayâs most pressing social and environmental issues. She co-founded Konbit Shelter in 2010 as a response to the devastating earthquake that struck Haiti then.

Other community-based efforts included collaborating on the construction of musical architecture in New Orleans and a neighborhood revitalization project in North Braddock, Pennsylvania. Swoon somehow graduated from Pratt in 2001 and in 2005 was the subject of a pivotal solo exhibition mounted by now-mentor Jeffrey Deitch. Her studio practice of drawing, printmaking, architectural sculpture, and installations helps support her good deeds. Curryâs work has been collected and shown internationally at places as renowned as: the Museum of Modern Art, New York; the Brooklyn Museum; the Tate Modern; the Institute of Contemporary Art, Boston; and the SÃ£o Paulo Museum of Art. In 2017, Swoon created a large scale, site-specific installation in the Zaha Hadid-designed Cincinnati Contemporary Arts Center as part of a two-story solo exhibition.

In 2015, Swoon founded the 501(c)(3) Heliotrope Foundation to expand aid for urgent social crises. She advocates for the proper treatment of mental health and trauma through volunteer art therapy programming and various residencies and lectures. Her works at Moberg lean more to portraiture than anything else. Earth mother type subjects are prominent.

Influenced by the street art culture of Miami, New York and London, Santlov created his own street art, full of irony and glee. He originally conceived the âToysRLikeUsâ concept as parody to mock current trends and human behavior. Technology has taken Santlov to new levels. âToysRLikeUsâ became a sensation on social media.

trashhand is a self-taught, Chicago-based freelance photographer specializing in architecture and urban environments. He strives to explore and showcase the worldâs most forgotten and remote locations through his own visual perspective. His works here are taken from places other than Chicago, including Stockholm. trashhand is a generous mentor to other photographers, sharing his skills in hopes that others can find similar success and satisfaction through the art of visual capture.

This show will play at Moberg through Jan. 6. ♦