A celebration of three centuries of Japanese printmaking 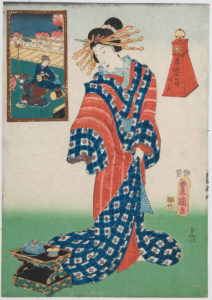 Ukiyo-e is the most influential school of art that most Americans never heard about. It had a huge effect on the Impressionists, particularly on Monet and Degas. It continued to influence artists like Frida Kahlo well into the 20th century. Translated as âpictures of the floating world,â these colorful Japanese woodblock prints preserved the cultural history of an insular world of hedonism, ritual and sensuality. Japan had little contact with the rest of the world during the time that ukiyo-e thrived, in the 16th through the early 20th centuries.

The Des Moines Art Centerâs (DMAC ) new show âBetween Vertical and the Horizon,â in the Print Gallery through Oct. 27, takes off from ukiyo-eâs unique, ahead-of-its-time art form to celebrate three centuries of Japanese printmaking. Ukiyo-e was a distinct reflection of Japanese aesthetics when the nation was isolationist and almost a caste system. Ukiyo-e emerged from Edo period Japan when the samurai class imposed a reign of peace and prosperity that also enforced the privileges of the military of priest classes.

Because entrepreneurs were free to become rich, but not allowed to indulge in reserved pleasures of the wealthy, merchant classes supported new creative arts such as kabuki, noh, geishas, restaurants, samurai, puppetry, etc. Nothing like these art forms evolved anywhere else, nor anywhere since. One print in the DMAC show is dated 1852 and is a portrait in a series of Japanese restaurateur masters. In 1852, French restaurants were still in infancy yet Japan had celebrity chefs. Isolation is not all bad.

The show though continues with a marvelous narrative of Japanese aesthetics since Commodore Perry forced the nation to open itself to the west. Sheep-counting insomnia, after-dinner sex in the kitchen (with witnesses), and the love of gardening are all featured in later styles of printmaking. Yet Japanese printmaking remains as unique as Japanese cuisine, which still eschews garlic as too harsh; as Japanese wrestling, which still out measures other types of grappling in both girth and celebrity; as Japanese theater, which has no match in dramatic angst; and as Japanese manuals of aesthetics, which have remained unchanged for 300 years.

Also in the DMAC, through Oct. 13, Noah Doely is featured solely in this yearâs Iowa Artists Exhibition. I have been writing about Doely in these pages since he was a teenager. Gallery owner TJ Moberg and DMAC Director Jeff Fleming have been following him every bit as long. Thatâs as rare as finding a sumo wrestler with no attitude. No longer a prodigy, this brilliant photographer is now a prof at UNI.

His exhibition at DMAC reveals the results of a cross country trip with aquatic rocks and a 120-gallon aquarium. We all do that, right? Using a pinhole camera, because thatâs the perspective that a chambered nautilus (close to an octopus) takes on his underwater peak shows, Doely produces a remarkable series of diorama photos that certainly look as if they were taken underwater in caves, where chambered nautilus and their ilk lurk.

Curator Jared Ledesma explains why this is both important and very cool.

âThe subject of caves suggests a web of connotations related to origins, such as the birth of art history in the cave painting of Lescaux, or more broadly in the formation of biological life. Platoâs âAllegory from the Caveâ reminds us to be skeptical of what we see in front of us, not unlike Doelyâs mysterious images. Most importantly, though, Doely imagines caves as the ancestor to photography. Like a pinhole lens light filters through openings on the surfaces of caves and projects images from above onto the cavernous chambers below,â he wrote in his catalogue for this exhibit.

Doely asks if this means the prehistory of the camera is not at least a billion years old. ♦