Love in the time of Der Fuhrer

The Grundigs defied the Nazis, buying a press and distributing pro-Jewish and Communist points of view. 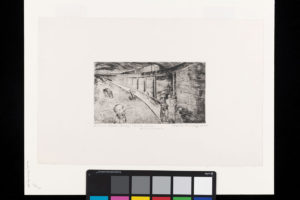 Lea Grundig is little known in the U.S. Thatâs a shame. She and her radical Communist husband Hans lived in Dresden during Germanyâs most modern Dark Age, the two disastrous World Wars and the Depression between them. Because Germany lost both wars, their people suffered perhaps more than anyone. Hitlerâs election was a desperate attempt at hopeless remedy.

After becoming Chancellor in 1933, art that did not fit his views on Aryan supremacy was deemed degenerate and banned in Hitlerâs Third Reich. The Grundigs defied the Nazis, buying a press and distributing pro-Jewish and Communist points of view. They survived the war, but Lea was twice arrested and spent two years in a Gestapo prison before escaping to Palestine.

The Des Moines Art Center wins again with another eye-opening print gallery show. Lea Grundigâs Anti-Fascist Art will play through Aug. 4. It exhibits 14 prints and one drawing, all but one made in the mid 1930s when her political art was death defying. The show also includes works by 12 other German-Austrian artists that dealt with decadence, poverty and oppression.

I am reminded of Abraham Lincolnâs words during the Civil War that we must remember lest we forget. Also, Winston Churchillâs words that âhistory is written by the victorsâ rings true here. These visions would never have survived a Nazi triumph, and, interestingly, almost all scholarship on the Grundigs is done in Germany today.

Perhaps the most fascinating subjects in this show are the children. Grundig has no soft spot for them. Rarely are they portrayed as innocents. Of course, this was the time of the Hitler Youth Corps, so her point of view is understandable. In âThe Witch,â children are actively harassing a bent old woman. Witches were portrayed sympathetically in old Germanic literature and art, so the children are cruel in context. In âChildren Play War,â they come off even worse. Young kids pretend to execute a firing squad while another kid urinates in a well while a woman with four more kids attempts to draw water from it.

Other children are posed as oblivious if not sympathetic or kindly. I imagine Grundig was asking her audience to wonder which Youth Corps brats would support Nazi concentration camps, the first of which were built the same year as the first of Grundigâs etchings in this show. As the art progresses chronologically, her human subjects become more sympathetic, as war and no real reprieve from hunger and poverty prevailed. Her âChildren at War,â the second-latest work in the show from 1939, reveals kids as complete victims. Her âLoversâ is captivating. It almost seems like an illustration to Robert Gravesâ âThe Thieves,â a poem written about the same time that tries to reconcile the act of love with quantum mechanics and disentanglement.

Also new on the local scene is âIn Bloom,â an arresting show of some of the most famous street artists in the world. Jason Woodside was curator for this show that features Swoon and D*Face and also includes Reuben Sanchez, Adele Renault, Pref ID, Itâs a Living, Adam Lucas and Maser. It will play through July 27. ♦