Moberg â 15 years against the odds

Today they represent 60 artists and work with 100 others from all over the world. 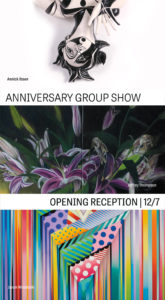 The first time I visited Moberg Gallery, then known as Moberg Studio, I had my West Highland Terrier with me, I peeked in the door and said I would put my dog in the car and come back. TJ and Jackie Moberg insisted I bring Sam in with me. At that time, the gallery represented four artists â TJ, his dad Tom, John Bromell and Bob Cooper. They needed support, even from West Highland Terriers.

Today they represent 60 artists and work with 100 others from all over the world. TJ originally reached out to friends, most of whom went to Grand View University art school with him. He kept his studio in the building and did not sell a single piece of art until six months into the business.

He was 28 years old when he opened his gallery. All around him, galleries were closing. In the period between two years before he opened and after he opened Percival Gallery, Art House, Bauhaus, Absolute Art, Steven Vail (later reopened), Karolyn Sherwood, Heartland, Kenneth Paul, and Bochner closed galleries.

Moberg poached top artists from this disruption. Chris Vance came to them after Arthouse closed. Heâs sold more art at Moberg than anyone else. Bill Luchsinger and Karen Strohbeen came over after Karolyn Sherwood closed. Larassa Kabel did, too. Sarah Grant and Scott Charles Ross came from Olson-Larsen on personal choice. They all lent prestige and sales to Moberg.

âToday, Chris Vance and Bill and Karen are our best-attended shows. Larassa Kabel is our best-reviewed show. Her âUpspeakâ exhibition particularly so. Who doesnât respond to a woman screaming at you while you are trying to look at art?â said gallery manager Ryan Mullin, winking.

Moberg evolved in many ways. Probably because they were young, and certainly because they were savvy, they got into to web sales early, which expanded their market. Today they represent as many national artists as Iowa artists. They have a gallery in Chicago and used to have one in Beverley Hills. They represent, not exclusively, Lianjie Kheng, one of the most celebrated Chinese artists alive.

What are Mobergâs best exhibitions in his 15 years?

âChris Vance is our consistent star. He has a huge following and sells well. Larassa Kabel is our best reviewed artist. Bill (Luchsinger) and Karen (Strohbeen) still draw a big crowd. But our best shows are our group shows. Our Winter Group Show will be up for months, and now we are also doing a Summer Group Show, too. I play in a salsa band. If we have four guys on stage, we will have a small fraction of the audience as if we have 10 guys. Everyone brings their friends and fans. Itâs the same thing with art shows. Group shows are better attended, and friends of artists will often buy works by other artists,â Mullin explained.

In June they are bringing five to 10 of the most famous muralists in the world to town to simultaneously paint murals on Des Moines buildings. The inspiration for this came from the brilliant Jason Woodside mural on the facade of Silver Fox at 28th and Ingersoll. If Moberg Mural Fest comes off, it will be the biggest art thing in Des Moines since the sculpture garden. There will also be a gallery show, with murals on paper, at the end of Mural Fest, which will coincide with Art Fest. ♦