Itâs not all degrading. 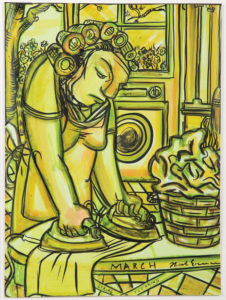 Main gallery shows draw the headlines and the crowds, but the print gallery is where one finds the most educational stimulants. The Des Moines Art Centerâs most recent show, âThis Womanâs Workâ (through Oct. 7), speaks to that point. Beginning chronologically with Winslow Homerâs Civil War nurses and factory workers, it chronicles a century and a half of attitudes about what kind of work is appropriate for the fairer sex.

In curator Laura Burkhalterâs words, âThroughout art history, the female body has been a primary subject, presented in painting, sculpture and photography as a vehicle of idealized beauty, grace and desire â most often by white heterosexual male artists. The lives of the real women â whether it be the models who posed for such artists, the servants who worked in their homes, the vendors who sold them food, or even the mothers who raised them â rarely appear in art. Even then their labor is usually romanticized.â

In a stunning 6-foot, 6-inch woodcut print by Allison Saar, a pregnant nude woman cradles her belly with one hand and the broom that seems to be growing instead of hair from her head with the other. The statement is obvious â women should be naked, child bearing, beasts of burden. Diego Riveraâs âMarket Womenâ similarly bear such heavy loads that they are nearly invisible. Nicole Eisenmanâs âSpring Cleaningâ shows a hunchbacked woman, with sagging breasts and hair curlers, overwhelmed by her home laundry.

Sex workers seem to have the most self esteem in this show. Eduoard Manetâs âOlympiaâ is a print of one the artistâs most famous and controversial paintings. It is rife with symbols of 19th century prostitution â a black cat, an orchid in her hair, and the name Olympia was slang for whore. Her left hand blocks her sexuality as if negotiating access. This was in stark contrast to conventional views of female sexuality which were usually depicted as enticing. What outraged viewers at the time was her confrontational, unapologetic gaze. Manetâs model for Olympia, Victorine Meurent, was an accomplished artist in her own right. Jacque Loweâs photographs of exotic dancers portray
the subjects with a certain dignity. So does Jean Mammenâs watercolor of a sailor and whore in âOstend Harbor.â âIsadora Duncanâ seems to be as defiantly self-promoting as the subject of John Sloanâs photo was in life and legend. âShe mastered the social media of her day,â said Burkhalter.

The star of the show comes with a fascinating back story provided by Burkhalter. Barbara Millicent Rogers, better
known simply as Barbie, was modeled after a German sex toy when she was commissioned by Mattel. In the David Levinthal photo of her in this show, she is modeling, the first career she was assigned by Mattel.

Two interesting shows are playing at the Faulconer Museum in Grinnell through Sept. 15. âFacedâ is the first U.S. exhibition of the photorealistic paintings of Canadian Charles Bierk. Best known as a landscape painter, Bierkâs portraits are frightfully probing. One of the paintings is of Jamaican artist Tau Lewis. âNuns, Hippos, and Extraterrestrials: Tom Schneiderâs Painted Realityâ includes 15 paintings, two collages and six prints by a Chicago artist of great imagination. Each piece in the show derived from a tabloid story or a myth. His canvasses in this show are covered with a curtain of eyes and mouths. Itâs unnerving, in a good way. Itâs also great fun. ♦