A homecoming of sorts for Wagener 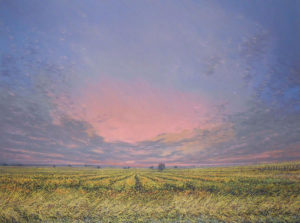 Ellen Wagener is simply one of the best Iowa landscape painters ever. She often follows the Monet strategy of revisiting the same place at many different times to observe the subtle changes in a steady environment. She took a long sabbatical from Iowa to the American southwest, and her point of view was missed here.

Her new show at Olson Larsen Galleries is a homecoming of sorts. As usual, the works are of similar places at different times, in different seasons and dramatic changes in the cycle of agriculture. Wagener has drawn considerable praise and attention from the Smithsonian, often for her paintings of tornado damage, dust storms, thunderstorms and other chaotic weather. Her âown private Iowaâ in the new show is more peaceful. She uses big skyscapes to contrast with her fields of corn and tree lines. While the fields and land seem stuck in an extended phase, her skies are usually suggestive that anything could change on the whim of a fleet footed Apollo.

The gallery pairs Wagener with Coe professor John Beckelman. While Wagener uses the Iowa earth as subject, Beckelman employs it as media. He makes collages with clay and mixed media on paper plus sculptures of concrete and shards of fired ceramics. The repurposing of ceramic material and contrasting it with the stalwart nature of concrete provides a similar contrast to what Wagener puts forth. This show plays through April 7.

The much anticipated âWanderlust: actions, traces and journeys 1967-2017â opened in late February to really big crowds at the Des Moines Art Center (DMAC). If art shows can have a piece de resistance, this oneâs is âGyreâ by Marie Lorenz. It hangs in the space best remembered for the âFibonacci Lizard,â covering a three-story gallery with 50 molds and 1,000 porcelain sculptures. The latter are made from found objects the artist retrieved from beaches and trips, in a handmade boat, down New York waterways. Visitors delight in climbing the stairs to observe the work from so many different points of view. Itâs reminiscent of the glee people took climbing through the cellophane tunnels of the previous DMAC exhibition âDrawing in Space.â

Other memorable components of this really big show include Los Angeles artist Zoe Crosherâs series of studies of places where famous people disappeared, and where fictional characters from Hollywood movies disappeared. The sites of the final sightings of Natalie Wood, Aimee Semple McPherson, Dennis Wilson, Bob Hyde (âComing Homeâ), Norman Maine (âA Star Is Bornâ), Roger Wade (âThe Long Goodbyeâ) and D-Fens (âFalling Downâ) make one wonder how real Hollywood and fame are. Iowa artist, and likely murder victim, Ana Mendieta is represented in the show with a series of earth works she did in Mexico, impressing images of her body in the soil. Remember Mary Chapin Carpenterâs hit song âThe Bugâ? Artist Greg Stimac pays its chorus (âSometimes youâre the windshield/sometimes youâre the bugâ) homage with a series of photos he took of his windshield after road trips in the South, Midwest and West. Roberley Bell shows a series of photographs she took in search of urban Istanbul trees she had documented five years earlier. In the meantime, the intended demolition of Gezi Park in that city, for a shopping mall, caused such widespread protests that it became symbolic of the endangered status of trees and parks in urban environments. The trees in Bellâs photographs twist and stress their way to light and survival. This show plays through May 13.