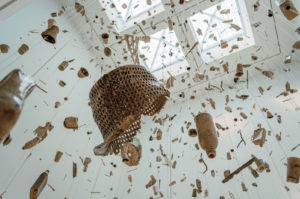 The Des Moines Art Center has hosted many exhibitions that could easily have been subtitled âWanderlust.â Their retrospective on Henri Cartier-Bresson particularly comes to mind. That show was about the great photographerâs worldwide search for truth and meaning. It featured his wanderlust in a traditional context â the heroic quest of going out and coming back with an enriching knowledge.

âWanderlust: Actions, Traces, Journeys 1967-2017,â which opens on Feb. 17, is an exploration of less epic ventures. Basically, it is described as a survey of 50 years of art that is not confined to studios or four walls. It is the kind of show that would make my grandfather roll his eyes and say something about âreal art.â Among the subjects are a Michael x. Ryan sculpture of spilled soda; an Allan Kaprow photo of people walking in a park with shoes on leashes; Pope L.âs video of a black man in a capeless Superman costume crawling down Broadway on hands and knees; and Wangechi Mutuâs single channel video of a woman hacking a log with machetes.

Obviously, a lot of the artwork in this show is about futility, oppression, capitalism and political correctness. I am reminded of a Far Side cartoon by Gary Larsen in which one side of a Viking ship is being rowed by massive, bodybuilding types while the other side is rowed by emaciated folk. The caption read âI have it too Omar. The feeling that we are just traveling in circles.â Most of the work in this show lacks that kind of sense of humor. In fact, itâs dead serious.

As much as old cynics like my grandfather are unlikely to like much of this art, PhDs in art history will love it. Itâs the kind of show where most viewers need expert help understanding all the symbolic layers of meaning. The London art critic Dominick Czechowski, who reviewed this show in its first incarnation in two Buffalo museums, explained a lot of that. For instance, Mutuâs video is about the genocides in Rwanda and Sierra Leone.

The most accessible part of the show, at least to non-academics, is the considerable section of âeco-feminist art.â Twelve pieces by the late Iowan and feminist martyr Ana Mendieta document her âearth bodyâ work, imprinting her body on Mexican land marked with her blood, fire, stones and pigment. Itâs easy to appreciate the basic pagan goddess versus the patriarchal enslavement that would murder Mendieta. Similarly, Polish artist Teresa Murakâs âProcessionâ shows the artist walking about Warsaw in a coat of native wild flowers. Rosemary Castoroâs âGates of Troyâ shows the artist wrestling with a large piece of sheet metal while trying to walk through Manhattan.

Because this show is about art outside the museum and studio, it will also include six special public performance art experiences, including two with Todd Shalom and two with Mary Mattingly who endeared herself to Des Moines in 2015 by constructing the âWading Bridgeâ on the water trail of the Raccoon River. ♦